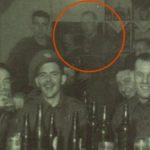 I'm not exactly breaking new ground when I say that military history and haunted history are intimately connected. Ghosts of entire armies still trudge through the fields and forests of Europe, according to paranormal buffs and folklorists. There are so many ghost stories lingering around American Civil War battlefields that a cottage industry of ghost tours and haunted hotspot guidebooks have blossomed around those sites.

Experts on these hauntings say the connection between conflict and haunted activity is no mystery. The equation goes something like this: Death + High Emotional Intensity = Ghosts. My question before writing Haunted World War II was: Would the world's greatest conflict create the world's greatest collection of stories about spirits and tales of the supernatural? I'll let the readers judge from themselves, but I found that World War II, arguably history's most violent conflict, serves as the source of a considerable amount of ghostlore, as well as accounts of paranormal activity and high strangeness. Here are Haunted World War II's top ten weirdest tales that help stake the war's claim as history's most haunted conflict.