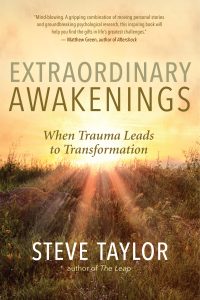 An Excerpt from Extraordinary Awakenings by Steve Taylor

Human life has always involved a great deal of hardship and turmoil. The Buddha was right when he established his first noble truth that “life is suffering” (or, according to some interpretations, that life “involves” suffering). For most of our ancestors, life was an endless cycle of various forms of suffering — the physical suffering of hunger, illness, and warfare; the social suffering of oppression and injustice; the psychological suffering of frequent bereavements and lack of freedom and opportunity. For modern human beings who are fortunate enough to live fairly secure and affluent lives — such as many Europeans and North Americans — suffering has become more oriented toward the psychological than the physical. We may not be as prone to poverty, hunger, and illness, but our psychological sufferings are manifold. We suffer the stress of demanding daily lives and competitive societies, along with the mental strain of being bombarded with massive amounts of sensory stimuli and information. We suffer the isolation and alienation of fragmented urban lifestyles that lack a sense of community. We suffer depression due to isolation and a lack of meaning and purpose in our lives.

It is difficult to make sense of human suffering. The idea that there could be anything positive about our suffering may seem absurd. But many people find that suffering does have positive effects, at least in the long term. In recent years psychologists have devoted a lot of time to studying the phenomenon of “post-traumatic growth” (PTG). The idea is that different types of trauma — such as bereavement, serious illness, accidents, oppression, and divorce — may ultimately lead to significant personal development. Research has shown that around half of all people experience some form of personal growth after traumatic events. In the long run, they feel a new sense of inner strength and confidence and of gratitude for life and for other people. They develop more intimate and authentic relationships and have a wider perspective, with a clear sense of what is important in life and what isn’t.

In this book we will examine another, related phenomenon, which I call “transformation through turmoil” (or TTT). We will investigate the miraculous phenomenon of how intense psychological suffering can bring about a sudden and dramatic shift into a new identity. The book will show you how spiritual awakening can occur in the most unexpected places. You will meet some amazing human beings, all of whom have experienced the worst predicaments that human life can offer but have responded to their suffering not by breaking down but by shifting up to a higher-functioning awakened state, like a phoenix rising from the ashes. You will meet people who woke up following bereavement, after a deep depression that led them to the brink of suicide, after years of addiction that broke them down to nothing, or after an accident or illness led to an intense encounter with their own mortality. You will meet long-term prisoners who experienced transformation as a result of incarceration and soldiers who woke up as a result of the stress and anxiety of warfare.

The Most Remarkable Transformation Transformation through turmoil is the most remarkable phenomenon I have ever come across. It’s amazing that human beings are capable of transforming so suddenly and radically that they feel they are completely different people living in the same body. People who were addicted to drugs or alcohol for many years are suddenly freed of their craving, because they are reborn as new human beings who don’t carry any addictions. People who spent years struggling against depression suddenly find the burden of their mental torment lifted, as they transition to a state of permanent ease and well-being. People who attempted suicide begin to see life as a glorious and miraculous adventure. People who have been imprisoned for many years undergo a spiritual liberation that frees them from any sense of restriction or deprivation.

There is a striking uniformity in the state that the “shifters” (as I call people who have undergone this transformation) describe, as if the state were an unfolding level of human potential that everyone may have access to. It is a higher-functioning state in which people live much more easily and effectively than normal. People who have experienced TTT feel a constant sense of well-being and a strong sense of connection to other people, to nature, and to the world as a whole. The world seems a fascinating and beautiful place to them. They are less materialistic and self-centered, more compassionate and altruistic. They have a strong sense of meaning and purpose and an intense sense of gratitude for everything in their lives, and for life itself.

It sounds like a miracle, akin to the born-again experience that followers of some religions describe. It is superficially similar to this — and indeed, we will see a few cases in which people did interpret their shift in religious terms, because this was the only framework they had to understand it. But in reality, TTT is quite a different phenomenon. Born-again religious experiences are usually conceptual experiences in which a person’s belief system changes and they adopt a new lifestyle based on those beliefs. But TTT is nonconceptual. If anything, it is about letting go of beliefs rather than adopting them. TTT is a complete transformation of identity and being. This is probably why research shows that born-again religious experiences are usually temporary, whereas TTT is invariably permanent.

Steve Taylor, PhD, is the author of Extraordinary Awakenings and many other bestselling books. He’s senior lecturer in psychology at Leeds Beckett University and the chair of the Transpersonal Psychology Section of the British Psychological Society. Steve’s articles and essays have been published in over 100 academic journals, magazines, and newspapers and he blogs for Scientific American and Psychology Today. Visit him online at www.StevenMTaylor.com.

Adapted from the book from Extraordinary Awakenings: When Trauma Leads to Transformation. Copyright ©2021 by Steve Taylor. Printed with permission from New World Library.