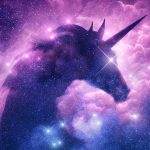 Unicorns are not what they seem.

On the surface level, in mainstream modern culture, unicorns are all but synonymous with fluffiness and frivolity, in the form of fancy birthday cakes, festive makeup tutorials, and fussy nail art. But, dig just a tiny bit deeper, and you will discover ancient spiritual traditions from both east and west, steeped in spiritual significance that is venerable, varied, and vast.

Here are seven of the most pronounced mystical meanings of this wise and elusive creature who has managed to remain prominent in human consciousness in multiple cultures and continents for thousands of years.

Clearly, unicorns are good medicine, and there is a reason why they're so prominent in our cultural consciousness at this time. Feeling drawn to unicorns indicates a natural desire to heal both ourselves and our world, and to restore our beloved planet to its natural state of wholeness, harmony, and well-being.