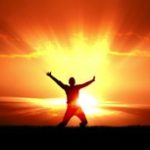 An excerpt from Conscious Evolution by Barbara Marx Hubbard

The human potential movement began to come to public attention in the 1960s with the seminal work of Abraham H. Maslow, Viktor Frankl, Robert Assagioli, and others who discovered, nurtured, and affirmed the higher reaches of human nature. They developed techniques and practices to fulfill untapped human potential. In his seminal book, Toward a Psychology of Being, Maslow identified a hierarchy of human needs inherent in all of us. He said that we all have basic needs for survival, security, and self-esteem. When these basic needs are relatively well met, a new set of needs arises naturally. They are growth needs for self-expression in work that is intrinsically valuable and self-rewarding. Then, transcendent needs emerge: to be connected to the larger whole — one with Source — to transcend the limits of self-centered consciousness itself.

Maslow had the genius to study “well” people rather than the sick and discovered that all fully functioning, joyful, productive, and self-actualizing people have one trait in common: chosen work or vocation that they find intrinsically self-rewarding and that is of service. If we do not find life purpose at the growth stage, he reasoned, we become sick, depressed, and even violent. People in modern society, he said, are stuck between survival needs and growth needs for further self-expression and self-actualization in a culture of intrinsic meaning.

Through the human potential movement millions of us have awakened, crossing the barrier from survival to growth needs. Yet, ultimately all of us want to find life purpose and meaning — a potentially huge community of people, perhaps a majority in the developed world (where basic needs are relatively well met).

An Evolutionary Agenda
The social potential movement is the vital catalyst to carry us through the twenty-first century and to fulfill our collective potential in the third millennium. It is now surfacing in society and is ready for a shared vision that attracts and connects us, not only with one another but also with society as a whole. The time is ripe to move toward a new evolutionary agenda — not to reform but to transform based on the full and appropriate use of our immense new powers. This agenda is based on the hierarchy of social needs, which calls upon us to:

meet basic food and shelter needs of all people;
limit our population growth;
restore and sustain Earth’s environment;
learn to coexist with other species;
learn sustainable economic development and new forms of monetary democracy;
shift the vast military-industrial-technological complex toward building new worlds on Earth and in space;
redesign social and economic systems to enhance human compassion, cooperation, and creativity;
emancipate individuals’ unique potential and life purpose;
explore and develop the further reaches of the human spirit and the universe beyond the planet of our birth;
guide our radical new technologies, such as genetics, nanotechnology, robotics, and space development toward evolutionary, life-oriented purposes.

What would happen if we began to use our new scientific and technological powers within such an evolutionary, open-ended agenda? Ancient prophecies have foreseen our self-destruction, but few of us have seen the magnificence of what we could become, collectively, through the use of all our powers — spiritual, social, scientific, and technological. In the past our glorious visions of the future — heaven, paradise, nirvana — were thought to happen after death. The newer thought is that we do not have to die to get there! We are not speaking here of life after death in some mythical heaven, but life more abundant in real time in history. We are discovering and participating in the next stage of our social evolution, the next turn on the Evolutionary Spiral.

A Spirit-Motivated Process of Action for the Twenty-First Century
We now know that a pattern or design of action, also known as DNA, is encoded in the genes of every living organism and guides it from conception through gestation, birth, maturation, and death. From the study of epigenetics, we have also learned that the DNA code is a script that is influenced by the membrane or consciousness that surrounds the cell. It is not static and unchanging; it is responsive to its environment. Like the human body, planet Earth is a living system. Is it not possible, then, that there is a prepatterned (but not predetermined) tendency, an encoded design for planetary evolution, just as there is for biological evolution? And that our attitude, consciousness, and every action are affecting that life cycle?

As there is a biological cycle, it is also evident that there is a planetary life cycle. Earth’s conception occurred with the big bang. The period of gestation included its 13.8 billion years of evolution, from its formation 4.5 billion years ago to the origin of human life. Its “birth,” or collective awakening, is happening now as we begin to realize that we are one planetary body, capable of destroying ourselves or cocreating an immeasurable future, on this Earth and in the universe beyond. And we know that 4.5 billion years from now our sun will expand and destroy all the planets in the solar system. We live precisely midway in the life cycle of our planet. We have not yet seen another planet go through this change, so we have nothing with which to compare it. But let us imagine for the moment that we are a normal planetary event in the universe and that there is a pattern encoded in our collective spiritual, social, and scientific awareness, ready to be activated and affected by our actions, when the time for conscious evolution is here, just as the imaginal discs self-organize into new bodily functions when the caterpillar is ready to transform.

To awaken our magnificent social potential, we need first and foremost to become aware of our “new story,” our evolutionary story. This story places us in the cosmos and reveals to us our vital part in the evolution of ourselves and our world.

I believe that the crises and opportunities we face today are triggering the next stage of planetary evolution and that we, as individual members of the planetary body, are now being awakened to our new personal and social capacities to participate in our evolution. This is not a plan imposed by any group or individual, but rather a design of evolution, a tendency toward a higher, more complex order and consciousness, with which we can cooperate and align ourselves to re-pattern our social systems and evolve ourselves.

Futurist Barbara Marx Hubbard is a prolific educator and author of seven books, including a revised and updated edition of her seminal work Conscious Evolution. She is an evolutionary thinker who believes that global change happens when we work collectively and selflessly for the greater good. Visit her online at www.evolve.org.