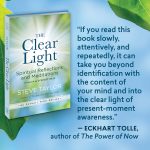 by Steve Taylor, author of many books on spirituality and psychology including  The Clear Light, The Leap, and The Calm Center

2006 was a difficult year. In April our second child, Ted, was born. Ted was a lovely baby (and is a lovely boy now) but he seemed to be born without the need to sleep. At night it was difficult to settle him down, and when he finally did settle, it was usually only for a short time. He would usually wake several times throughout the night, every hour or so, and my wife and I would take turns getting up. This isn’t unusual for a new baby, but with Ted it went on for a long time. I was working as a college tutor, at the same time as working to meet the deadline for a book, and soon became exhausted (although not as exhausted as my wife). We also had Ted’s three year old brother to look after. Eventually - probably because of the stress - I became seriously ill for the first time in my life, leading to two weeks in hospital and an operation. Strangely enough, it was while I was in hospital that Ted finally - after nearly 9 months - settled down, and began to sleep through the night.

It was during this time of turmoil and stress that I began to write poems and short spiritual reflections. I’ve always loved poetry, and in my youth I had written a lot of poems and song lyrics (none of them particularly good). But it had been more than 10 years since I’d written a poem, and in any case, the pieces that were starting to come through me now were different. They weren’t prose, but they weren’t exactly poems. They were poetic, but a little too loose and free to correspond to traditional concepts of poetry.

The pieces seemed to arrive from nowhere, as if they had been slowly gestating inside me for years, waiting for the right moment to emerge. Phrases would form in my mind, and when I sat down to write them down, other phrases would follow, until complete pieces would be in front of me. It was similar to channelling - the ‘raw material’ flowed into me, and my task was to give it form, to mould and edit it into the right shape. I was surprised by the voice which spoke in the pieces - a wise, assured voice, more weighty and more profound than my normal writing voice. This voice came from the deepest and highest part of me, and was able to express profound insights easily and directly.

Ever since then, poems and spiritual reflections have continued to flow through me. Some of them are collected in my new book The Clear Light. Sometimes the pieces arise in such an involuntary way that I forget about them quickly and am surprised when I read them again, wondering if I actually did write them. They emerge from formless consciousness. As I put it in my new book:

Every morning when I wake up, I re-create myself.
I emerge from formless consciousness
like a diver rising to the surface, still immersed in bliss.
And slowly I remember the world and who I am.

Years later, I began to wonder if there was any reason why I began to write these pieces. I think there may well be connection with the stress and turmoil of that period of my life. I’ve always been fascinated by the strong connection between psychological turmoil and spiritual awakening, which I explored in my book The Leap. Combined with an attitude of acceptance, turmoil can have an awakening effect. As I put it in The Clear Light:

Trauma can break you down to nothing
destroy the identity you spent your whole life
building up
like an earthquake that leaves you in ruins
or trauma can transform you
break open new depths and heights of you
give rise to a greater structure, a miraculous new self
and the only difference between them is acceptance.

There is a strong connection between psychological turmoil and creativity too. Musicians and writers sometimes find that their inspiration fades away when their lives are comfortable and stable, and that a period of turbulence - e.g. the break up of a relationship, illness, depression - can reawaken their creativity. And so it may be that the turmoil of this period of my life led to a spiritual opening and deepening which led to many powerful awakening experiences and also expressed itself creatively, enabling the channelling of these reflections and meditations.

My life is fairly stable now, and I’m in good health, and Ted has grown up into a wonderfully joyful and loving boy. And fortunately, the channel which opened up nine years ago has remained open. That wise assured and authoritative voice is still speaking through me. The pieces are still coming through fairly regularly, even though I don’t put any pressure on them. I feel massively grateful that new ideas and insights keep forming. I still feel deeply connected to that creative spiritual source - and I hope that reading these pieces has connected you to it too. Let me end with these words from The Clear Light:

Let’s meet purely in presence
without any conditions or concepts
knowing that in essence we are the same
and that in being we are one.

Steve Taylor is the author of several bestselling books on psychology and spirituality, including The Clear Light, The Leap, and The Calm Center. His articles and essays have been published in over 50 academic journals, magazines and newspapers, including Scientific American and Psychology Today. Since 2011, he has appeared annually in Watkin’s Mind Body Spirit magazine’s list of “the world’s 100 most spiritually influential living people.” He lives in Manchester, England, with his wife and three children. Find out more about his work at www.stevenmtaylor.com.

Excerpted from the book The Clear Light. Copyright ©2020 by Steve Taylor. Printed with permission from New World Library.