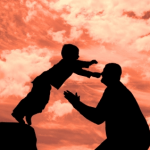 Rediscover Beltane with Kids and Mayples, by Bronwen Forbes

Last May my family—including my three-year-old daughter—attended the local community's Beltane festival and picnic. I was excited—this would be Rose's first Maypole dance! She'd proudly helped me purchase our ribbons at a fabric store prior to the event, and couldn't wait to tie them onto the Maypole crown. Rose's grandmother is a retired elementary school music teacher. Every year she taught the fifth- and sixth-grade girls how to dance around a Maypole. It was time to teach my daughter the "family tradition."

Unfortunately, Rose got tired after a couple of "rounds" around the Maypole, and I ended up carrying her piggyback the rest of the time. Looking around afterwards, I don't think too many of the under-ten attendees lasted until the final ribbon was tied, either. Adults tended to run them over, get impatient when the kids couldn't remember the "the ribbon goes over, then under, then over" pattern (and never mind that half the adults had the same problem!), and it went on so long that the little ones (and those of us who carried them most of the way) were utterly exhausted when it was over. What, I wondered, could be done to make the Maypole dance as much a part of our kids' Beltane tradition as it is ours?

The absolute best and most obvious solution is: give them their own Maypole. Little ones don't mind sitting at the "kid's table" at Thanksgiving until they and the adults decide they're too old; the same arrangement could be made for dancing around the Maypole. Let the older ones (say, age twelve and up) "graduate" to the big Maypole when they feel old enough and tall enough to keep up with the grown-ups.

Here are my tips for making sure a separate kids' Maypole is as successful as the "big" one:

Maypole dancing has always been a community celebration. The poles used to be erected in the middle of the village green or town square—accessible to anyone who chose to dance around them come May 1. In a perfect world, "community" includes the elderly and children, as well as working-age adults. There are several historic accounts of everyone from the mayor to the youngest schoolchild taking place in British May Day celebrations. A little pre-planning could ensure that your Beltane celebration captures this same inclusive spirit, and also guarantee that your kids look forward to skipping around the Maypole as much as you do!