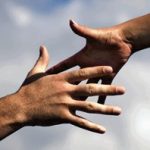 The look is instantly recognizable: a slight bit of disarray, a slouched shoulder, and a frantic eye searching for a remedy.

Recently, my son and I were returning home from our first mother-son trip since the twins were born. We couldn't have had a better time. We had arrived at the airport on time and were headed to security with our backpacks. I was gloating because traveling with one child was light-years easier than with three. We were floating along without a care in the world when suddenly a woman just ahead of us caught my attention.

Here eyes were the giveaway - red, swollen, and still teary. I had noticed her earlier, sitting in the terminal next to a man and a baby in a stroller. But here she was in front of us now, without the man. And the baby was fussing. There were bags everywhere - diaper bag, clothing bag, bottles in a bag - all attached to her or the stroller in awkward ways. Her eyes met mine, and I froze. She needed me.

Are you okay? I asked quietly as I put my hand on her shoulder. She looked at me in disbelief. Then relief.

What can I do? She looked baffled. I sprang into action, directing my son to start grabbing bags. You get your baby, and we'll get the rest, I ordered. We functioned as if we were a NASCAR pit crew. We unfolded the stroller and had her back together in no time.

My spirits sank, though, as I watched a female security agent approach and ask to check her bags. The agent began to rifle through her things. Oh, my poor new friend. Could she bear it? My uncertainty quickly receded when I heard the agent say, Oh, honey, let me help you get organized. I knew that I had handed her off to another compassionate mother, and my job was done. I went to her to say good-bye and reassure her that she'd be fine now. She was still tearful, but her smile said enough. We turned and walked away.

As we headed to our gate, my son asked why we had helped her. My answer was simple. We helped her because she needed it. We did it because it is right to recycle the goodness that we receive in our own lives. Whether he understood did not matter to me. What was important was that I felt privileged to have the opportunity to pass the goodness on.

It is sometimes hard to describe, even to myself, what being a mother means, but I'd like to think that it includes the capacity to act unselfishly in an instant. I walk just a little bit straighter now, as if there is starch in my backbone, even with diaper bags on my back and a young one on my hip. It is as if that day in the airport, I reclaimed my own dignity as a woman and mother, knowing that I can make a significant difference to other people in very ordinary ways.

The above is an excerpt from the book Spot of Grace, copyright 2008 by Dawna Markova. It is printed here with permission of the publisher, New World Library, 1-800-972-6657 ext. 50. Inspirational speaker and writer Dawna Markova, Ph.D., is internationally known for her ground breaking work in helping people learn with passion and live with purpose. She is the author of numerous books, including the bestsellers Random Acts of Kindness and I Will Not Die an Unlived Life. A long-term cancer survivor (she was told she had six months to live almost thirty years ago), Dawna has appeared on numerous television programs, and is a frequent guest on National Public Radio and New Dimensions. She offers seminars and workshops and speaks at business and educational conferences internationally. Her website can be found at www.dawnamarkova.com.