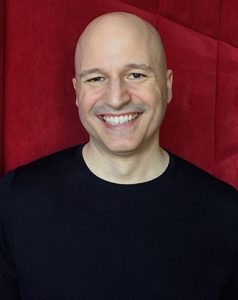 An excerpt from Big Love: The Power of Living with a Wide-Open Heart by Scott Stabile

Author and Facebook sensation Scott Stabile’s parents were murdered when he was fourteen. Nine years later, his brother died of a heroin overdose. Soon after that, Scott joined a cult that dominated his life for thirteen years. Through it all, he became evermore committed to living his life from love.

In each chapter of his new book Big Love: The Power of Living with a Wide-Open Heart, Scott shares a personal experience that pulled him from his center and the ways in which he brought himself back to peace, and to love. While some of his experiences are extraordinary, like extricating himself from a cult after 13 years, most of the stories reflect on everyday challenges we can all relate to, like the weight of shame, the search for happiness, and the struggle to be authentic.

We hope you’ll enjoy this short excerpt from the book.

If you’re anything like me, you haven’t gotten along too well with your fear up to now. You two may spend a lot of time together, but I doubt you’re very friendly. It doesn’t have to be that way. We can create a different, gentler relationship with our fear, and by doing so we create a more fulfilling relationship with ourselves.

I’ve hated my fear for all the limitations it’s placed on my life. I’ve resented it for influencing my choices and pushing me to make cowardly decisions that have steered me away from rather than toward exciting possibilities and more meaningful realities. I’ve judged my fear a bully, a tyrant, the single greatest obstacle to my happiness. I had never considered that my fear cared about me or that it had always been, in fact, just trying to protect me, the only way it knew how. Don’t get me wrong. I still consider my fear a serious pain in the ass, but it no longer scares me the way it used to.

My fear is just a dummy most of the time. So is yours. It doesn’t mean to be, but it doesn’t know any better. Fear takes its job — to protect us — incredibly seriously, but it has no emotional intelligence with which to work. My fear wants to protect me from a difficult conversation with the same fervor it uses to keep me from sprinting into traffic. Fear can’t tell if it’s a mountain lion or a cute barista that has you all worked up. It deems anything uncomfortable as unsafe and, therefore, something to avoid. Rattlesnakes, job changes, new hairstyles — they’re all the same to fear: scary. So our fear ignites terror in our minds — a hellfire of what-ifs — to keep us safely in our comfort zones. More accurately, in its comfort zone. It’s not so much an enemy as an overprotective parent. And like any overprotective parent, fear has no intention of giving us our space.

I finally accepted that my fear had no plans to go away. That I would not, someday, suddenly become fearless. So many times, I’d stopped myself from taking action because I felt afraid — of rejection, of change, of failure, of the unknown. I didn’t ask the charming guy for his number, or didn’t get out of the unhealthy relationship soon enough, or didn’t submit my short story to the competition, or didn’t quit my miserable job. I let my fear prevent me from making positive choices, often telling myself I would make them when I felt less afraid — when I had become fearless about the decision. But I never became fearless; I rarely even became less afraid. So I stayed paralyzed in situations that didn’t serve my happiness, or I bypassed opportunities that likely would have benefited my life.

Can you relate? Have you ever held out on making a necessary change until you felt less scared to make it and ended up not making the change at all? Change will always be scary. Fearlessness will always be a myth. We can be afraid and still make courageous choices. Courage doesn’t even exist without an element of fear. It’s action with fear that makes a choice brave.

Scott Stabile is the author of Big Love. His inspirational posts and videos have attracted a huge and devoted social media following, including nearly 360K Facebook fans and counting. A regular contributor to the Huffington Post, he lives in Michigan and conducts personal empowerment workshops around the world. Visit him online at www.scottstabile.com.

Excerpted from the book Big Love: The Power of Living with a Wide-Open Heart. Copyright ©2017 by Scott Stabile. Printed with permission from New World Library.