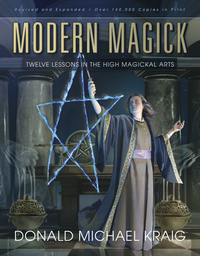 I am so very grateful to the many people (over 150,000 of you!) who have made Modern Magick the most popular and successful book of its kind ever published. Many people have told me how Modern Magick changed their lives for the better. It has changed my life, too. It enabled me to meet amazing people, travel the world, and share information. It's been an incredible ride, and I like to think that I've merely finished the first lap and that the future is going to be even more fantastic.

As you may know, I teach workshops all over the US. I have had to change various workshops to meet the needs of the changing times. And yet, in spite of a second edition with corrections and an added section (The "Modern Magick FAQ"), the book Modern Magick was essentially unchanged.

Is Modern Magick Modern?
I have to admit that I'm prejudiced, but I think that Modern Magick is a great book. Its purpose has always been to help people become fully grounded in the basics of practical magick so that anyone could understand, learn, and work with any system of magick. Part of the goal was to do this from a contemporary perspective, bringing old and archaic presentations up to date. Frankly, I don't know of any other book that does this and covers so many topics, including such things as the kabalah and kabalistic magick, ceremonial magick, banishings, divination, Tarot, astral projection, talismanic magick, natural magick, evocation, astral rituals, invocation, sex magick, Tantra, pathworking on the Tree of Life, psychic self-defense, real meditation, visualization techniques, designing your own rituals, inner and outer alchemy, making and consecrating magickal tools, and so much more.

In the world of magick, change occurs slowly. Most of the supposedly new paradigms of magick that have appeared over the past few decades have vanished. They were often simply someone's personal interpretations of traditional magick, not really anything new. When that person's interest in their supposedly ALL NEW! discoveries of magick waned, their new system was mercifully forgotten.

In all of this, and for over two decades, Modern Magick has held up extremely well. But as I looked over the book, everything from my way of saying things, the art, and even the way the text looked on the page felt old and dated. The information was still good, but Modern Magick just wasn't modern any more.

The Phoenix
Phoenix: A mythological bird that lived for centuries in the Arabian desert. It then burned itself in a funeral pyre and would rise from the ashes with renewed youth and vigor, ready to live for another cycle.

With the encouragement of Llewellyn, I began the process of completely updating Modern Magick. This has taken over eighteen months to accomplish. It is not simply a few words changed here and there; it is literally a completely new book. As it is about to be published I feel as excited as I was when the first edition was published half of my life ago. Modern Magick, like a phoenix rising from the fires, is being born again more beautiful and better than before. Here are just some of the changes:

Okay. I'm taking a deep, cleansing breath…I’m relaxing now. If this article sounds like a prepubescent kid hopped up on three bowls of Cocoa Puffs cereal who is about to meet the Jonas brothers, I really apologize. But I can't help it! I'm really excited about this new version of Modern Magick.

I started this article by saying how very grateful I am to all of you who have supported this book. I'm ending it the same way. I am deeply indebted to those of you who have supported me by getting my books and attending my workshops and lectures. I just want to say two more things: First, I think when you see the actual, finished new edition of Modern Magick, you're going to be as excited about it as I am. And second, to thank you for your continued support, I promise to write more (including blogs) and give more workshops and more lectures so I can personally meet as many of you as possible.