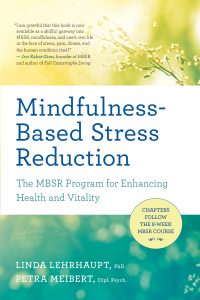 At the beginning of our institute’s nine-month mindfulness trainings, we ask people to write down their personal goals for the course. We collect the answers and return them at the last meeting. At that point we ask the participants to reflect on how they behaved at the start of the training and where they are now.

The comment expressed in the group most often conveys how hard participants were on themselves when they began the program — how demanding, harsh, cold, and unrelenting they were about the goals they set for themselves. One woman hit the mark when she said, “I would never knowingly choose to treat someone the way I treated myself.”

In his book Meetings at the Edge, Stephen Levine, a meditation teacher and expert on death and dying, writes, “Kindness to yourself might be the most difficult path you will ever tread, because it is so unexplored and we have so little support for that kind of self mercy.”

Kindness toward oneself is a feeling that is foreign to many of our students. Some tell us they have no right to ask it for themselves: kindness is expressed only to someone else. Some identify gentleness toward themselves with weakness: Anything worth having, after all, has to be hard to achieve...doesn’t it?

Kindness is a rare gift that we seldom give ourselves. In reality, it is often something we think we have to earn. Kindness for ourselves becomes a commodity that we use to bargain with. For example, we might make ourselves work to the point of exhaustion before allowing ourselves a break.

Perhaps one of the unkindest things we do is try to change ourselves because we think something is wrong with us. We can become fixated on our flaws and even become addicted to the idea of self- improvement. To say, “There is nothing fundamentally wrong with me,” sounds like a lie, a brag, or self-delusion. What prevents us from accepting our inherent goodness is a harsh, critical attitude toward ourselves that other people notice but which often goes unnoticed by us.

One of the most destructive applications of this attitude is to tell others (or ourselves) that there is something wrong with them as a way to motivate change. Most research on optimism and on motivation behavior, such as the work of positive psychologist Martin Seligman, shows time and again that we flourish with praise and kind words, and that harsh, unfair, and personally motivated criticism is a form of emotional violence, especially when we internalize it and become our own biggest critic.

Many MBSR course participants say that the cultivation of friendliness toward themselves and the opportunity to experience it is one of the most important aspects of the course. That kindness, which allows them to open their hearts to themselves, helps nurture a new perspective.

During the course, we sometimes present a guided meditation on being kind to ourselves. The responses of course participants can be deeply moving. Once the meditation is over, there is softness in the room — gentleness — and often tears flow. Linda frequently reads a quote from Pema Chödrön, a widely respected American nun in the Tibetan tradition and meditation teacher, who wrote in The Wisdom of No Escape: “Meditation practice isn’t about trying to throw ourselves away and become something better. It’s about befriending who we are already.” Many in the group nod in agreement with these wise words that teach kindness and tenderness toward ourselves. We explore this theme in all of its aspects as we progress through the program.

Petra Meibert, Dipl. Psych, is the coauthor of Mindfulness-Based Stress Reduction and codirector of the Ruhr Institute for Mindfulness in Germany.