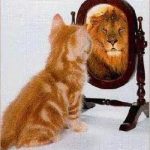 My mantra is “If you don’t ask, you don’t get” so this resonates with me on a personal level. Makes sense doesn’t it that, if you decide what you want in life and take positive steps to make it a reality, then who’s to say you won’t succeed. At least you’ve tried so, if you don’t get want you want, (this time), you can console yourself with the knowledge that you did what you could and it just wasn’t meant to be (this time). Much, much better to take action when and where YOU decide to rather than allowing yourself to be putty in the hands of Fate. Now, what would you rather do? Thought so! Well done!