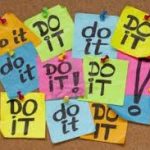 Here’s an example of the kind of letter I frequently receive from my clients: "I know what I need to do, I just can’t make myself do it. I watch endless YouTube videos, I play computer solitaire, I fool around on Facebook — I even scrub my kitchen floors — all just to avoid the work that I know is my destiny. I get so mad at myself. Am I chasing a shadow goal? What do I do?" — Elizabeth

Here’s what I would say to Elizabeth, and to you, since chances are fairly high you are dealing with the same concerns:

"Rest easy, honey — you are merely suffering from a biological imperative called 'displacement activity.'" Displacement activity is what happens when an animal is in the grip of two conflicting instincts, and so it enacts a third, seemingly inappropriate behavior.

For example, you’ve probably seen a chimpanzee being challenged by another chimpanzee. When the first chimp doesn’t know whether to run away or fight, he might scratch his head...yawn...look away...start grooming himself. Seems like a very passive response to aggression, but that chimp will do anything to deflect the energy, avoid making a decision, and otherwise make himself as invisible as possible.

When you have the instinct to create and you simultaneously have the instinct not to create, your fear says, “Don’t do it!” And so, confused by these two equally strong instincts, you shut down and get stuck playing an online word game for hours on end.
Sometimes years.

It doesn’t mean you have low self-esteem, and it doesn’t mean your dream is impossible, and it certainly doesn’t mean you’re lazy. So the next time this happens, just recognize the dynamic without yelling at yourself. “Ah,” you might say instead, “I appear to be having the instinct to create something. And I also find myself feeling afraid of what will happen if I create that thing. Perfectly natural. But my fear does not get to make my decisions for me. So I will now set my kitchen timer for fifteen minutes and just play around with my creative idea in a light, fun, beta-testing sort of a way and then see what happens.” And that’s what it’s all about — giving you the loving encouragement you need to move forward. And maybe a little loving thwack upside the head.

Fifty years from now, the details that you are worrying about will not matter one whit. But the art you create, the novel you write, the doll you sew, the dance you perform, the photograph you take — that will still be making a difference in the world.

Action Step
As your first step to action, spend fifteen minutes right now playing around with your favorite project. Once you get started, you'll find yourself compelled to continue!

From the book Get It Done by Sam Bennett. Copyright © 2014 by Samantha Bennett. Reprinted with permission from New World Library. www.NewWorldLibrary.com

Sam Bennett worked at the renowned Second City Theatre in Chicago alongside comics Steve Carell and Stephen Colbert. In addition to her multifaceted writing and performance work, she specializes in personal branding and career strategies. She lives in Los Angeles, CA. Her website is TheOrganizedArtistCompany.com