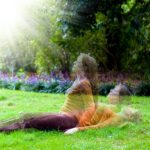 An Excerpt from Becoming Aware by Lisa Garr

The setting of the championship race was certainly picturesque: Castaic Lake, a reservoir formed by the Castaic Dam in the Sierra Pelona Mountains of northwestern Los Angeles. Action scenes for movies and TV are often filmed there because of the gorgeous but rugged natural terrain, and this is where I arrived for the state championship. I was in second place overall, but this was the last race and counted for double points. I was focused in on my goal of taking the title.


Lisa Garr is host and producer of a popular syndicated radio show called The Aware Show, heard in the Los Angeles market on KPFK 90.7 FM or on KPFK.org along with a Hay House Radio show called Being Aware. Lisa also hosts a series for Gaiam TV called Gaiam Inspirations. Her bi monthly Summit series is one of the largest on the Internet. And topping it off, she is a weekend host on Coast to Coast AM, syndicated in over 500 stations around the world. Her new book Becoming Aware (Hay House) helps readers transform their lives by showing how she applied 15 years of these experts’ lessons to her own life as a businesswoman, wife, and mother. Learn more at www.becomingawarebook.com.