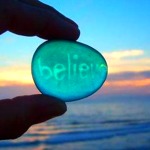 I love to imagine that we live in a magical world. Aside from the dark lord element of the Harry Potter story, I think many of us would love to live in a world where magic was happening all around us, and that we could use it. I have always enjoyed science fiction and fantasy novels.

I wonder, though, if strange things do occur. I have written previous blogs and books where I've suggested that consciousness is not inside the head but is something fundamental to nature, that it is like a field that connects all people and all things. Thus, I have suggested that meaningful and connected events can cluster together, and this can be a product of a person's beliefs, emotions or intentions.

Just a few days ago, my dog Oscar had to go to the vet for an operation. He was bitten by another dog over a month ago but the wound just hadn't healed properly. The vet decided that there must have been a piece of foreign material left in the wound and believed it best to cut the wounded tissue out.

I felt nervous as we were arriving at the vet for Oscar's operation, even though I knew it was a relatively minor procedure.

As I often do, I said a little prayer. We all know that there are lots of different deities and angels that people pray to. I asked Archangel Michael to watch over Oscar.

Less than a moment later, a man who looked just like the God character from the magical and inspiring film, Miracle on 34th Street, appeared at the other side of the wall that circles the vets' premises. He whistled for Oscar to approach him and when Oscar put his paws up on the wall, the man gave him a large kiss on the top of the head, looked at us and smiled, and then casually walked away without even saying a word.

A wave of emotion overcame me, and I had to take a deep breath not to cry. They weren't tears of sadness, but like knowing that something magical had just occurred, like a feeling of certainty that I'd received a sign. This might strange to some, but perfectly normal to others.

Once we dropped Oscar off I had to make my way into the town center to catch a train to London for a meeting with my publisher. As I was a little early for my train, I dropped into Costa to grab a coffee. By this time, my faith that all would be well with Oscar was beginning to waver. (It had been 20 minutes since I'd left the vet, after all. 🙂 ) Even though I had asked Archangel Michael to help, I was now trying to visualize all being well with Oscar and his operation. I was surrounding him with light and seeing light bathe the entire vets' practice.

As I was being served my coffee, I had the thought that I needn't visualize because I have already asked for help, that I should trust that my asking for help was enough, that by visualizing now was actually showing that I didn't have faith that Oscar was being watched over. Right then, my eye caught the name badge of the person serving me. Yes, it was 'Michael.' I smiled quietly to myself and silently whispered, 'message received!'

Of course, when you do feel a little nervous when it concerns loved ones, and my readers who have dogs, cats and other animals know that this extends to them too, faith does waver from time to time as nervousness kicks in. While I was walking to my train, a little nervousness arose again, so to distract myself, I decided to check my emails on my iPhone. The first email that popped in was from Neale Donald Walsch, one of his daily, 'I believe God wants you to know...' emails. It read:

'On this day of your life, Dear Friend, I believe God wants you to know...that medical procedures are nothing to be afraid of."

Okay, I finally got the message. I smiled broadly and felt warm inside. All was well and all would be well. There was nothing to worry about.

And indeed, there wasn't. We collected Oscar in the afternoon. He was still a little dozy from the anaesthetic, but within a few hours, he was his usual self.

I do like to imagine that things happen for a reason, and that all things and all people are connected, that our thoughts, emotions, hopes, dreams and intentions shape aspects of our lives, and that consciousness does exist in many more forms than our own.

I don't think of God as a man with a white beard who sits on a cloud, but I imagine that we are all Gods, that we are all part of the same field of energy or consciousness, and that we are capable of much more than we think we are, as our beliefs act like lenses that focus the field, much as an optical lens can focus sunlight. In the times when we have a little faith, I have noticed, we see more evidence of this in our lives, and we feel the warmth of the field.