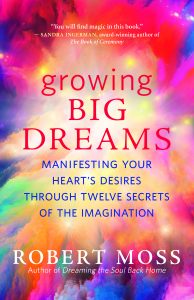 An Excerpt from Growing Big Dreams
By Robert Moss

The greatest crisis of our lives is a crisis of imagination. We come to a dead stop because there is a barrier in front of us and we can’t imagine a way to get around or over it. Our work space feels like it is walled with cement blocks that are closing in more tightly every day, but we can’t imagine where we would go if we quit. We can’t breathe in an airless relationship but can’t picture how to take off. We look in the mirror, when we dare, and see the age lines, the skin blemishes, maybe the thinning hair, not the beauty that we may carry inside.

We go on repeating to ourselves the tired old stories, strapped onto us by family or past histories of defeat and disappointment. Or we cling to memories of brighter days, or that win on the high school sports field, or that sweet summer romance, or that medal for valor, or that early success that was never repeated. Either way, by nursing grief or guilt or nostalgia, we manage to go through life looking in the rear-view mirror, stuck in the past, never fully available to the present moment.

Or we miss the moment by carrying anxiety about the future, screening mental scenarios for what could go wrong. We give ourselves a hundred reasons not to take the risk of doing something new, something that would take us beyond the gated communities of the mind into the wilds of creative adventure.

Conscious of it or not, we go around repeating our negative mantras. I’m too old. I’m not pretty enough. I don’t have the money. People always let you down. People don’t change. I’m so tired. You don’t think you do this? Pause for a moment. Take off the headphones. Listen to what’s playing on your inner soundtrack. It may be a song. “Am I blue?”

I confess there are days, between snowstorms in a northeastern winter, when my mood can slump and go the color of the dirty gray ramparts of ice on the curb in my small, gritty city. And more days like these in the shut-up times of the pandemic. I don’t want to get out of bed even to walk the dog, who is waiting for me patiently. I may be stirred back to life by a dream or a cheering message from a loved one or hopes of an ocean beach vacation or a foreign adventure. But when I find it is still hard to rise above a low, lethargic mood and dump those negative mantras — My legs hurt, I’m played out, I can’t walk on the ice — I call in one of the greatest life coaches I know.

I know him from his most famous book. Maybe you do too. His book is titled Man’s Search for Meaning. His name is Viktor Frankl. He was an existentialist — which is to say, someone who believes that we must be authors of meaning for our own lives — and a successful psychiatrist in Vienna before Nazi Germany swallowed Austria in 1938. He was a Jew and a freethinking intellectual, two reasons for the Nazis to send him to a concentration camp. For several years he was in Auschwitz, the most notorious of the Nazi death camps.

In the camp, every vestige of humanity was taken from him, except what he could sustain in his mind and his heart. He was in constant pain, reduced to a near skeleton with a tattooed number on his arm, liable at any moment to be beaten or killed on the whim of a
guard. He was there to be worked to death. He watched those around him shot or pummeled or carted off to the gas chambers every day.

He made an astonishing choice. He decided that, utterly deprived of freedom in the nightmare world around him, he would tend one precious candle of light within. He would exercise the freedom to choose his attitude. It sounds preposterous, if you don’t know the story of what unfolded. When people tell us we have a bad attitude in ordinary circumstances, we are usually not grateful. The suggestion that we can choose our attitude when the world around us seems cold and bleak or we have suffered a major setback, even heartbreak, sounds cruel. But let’s stay with Viktor Frankl.

When the light went out in his world, he managed to light that inner candle of vision. Despite the pain in his body and the screams and groans around him, he made an inner movie, a film of a possible life in a world where the Nazis had been defeated and Hitler was a memory. It was an impossible vision, of course, an escapist fantasy. There was no way he was going to survive Auschwitz.

But he kept working on his inner movie, night after night, as director, scriptwriter, and star. He produced a scene in which he was giving a lecture in a well-filled auditorium. His body had filled out, and he was wearing a good suit. The people in the audience were
intelligent and enthusiastic. The theme of his lecture was “The Psychology of the Concentration Camps.” In his movie, not only were the death camps a thing of the past; he had retained the sanity and academic objectivity to speak about what went on during the Holocaust from a professional psychiatric perspective.

This exercise in inner vision, conducted under almost unimaginably difficult circumstances, got Viktor Frankl through. One year after the war ended, in a good suit, he gave that lecture as he had seen himself doing in his inner movies.

What do we take away from this?

First, that however tough our situation may seem to be, we always have the freedom to choose our attitude, and this can change everything. Let’s allow William James to chime in: “The greatest weapon against stress is our ability to choose one thought over another.”

Second, that our problems, however bad, are unlikely to be quite as bad as the situation of someone who has been sent to a Nazi death camp. That thought may help us to gain perspective, to stand back from a welter of grief and self-pity and rise to a place where we can start to dream up something better.

Third, that we can make inner movies, and if they are good enough it is possible that they will play in the theater of the world.

If we take Viktor Frankl’s example to heart, we see that choosing your attitude can be an exercise in creative imagination that is much more practical and original than trying to edit your inner soundtrack (though that is worth trying) or telling yourself that you can’t afford the energy of a negative thought (you can learn to use the energy of any strong emotion, including grief and rage).

Would you like to make your own life movies, in which you enjoy the satisfaction of your deepest desires? Are you willing to grow a vision of bright possibility so rich and alive that it wants to take root in the world?

Then you want to learn to use your imagination. The word imagination comes from the Latin imago, or image. Imagination has been defined as the faculty that clothes the forces at play in the inner world in images so we can perceive and interact with them. Phantasia, from which we derive fantasy, is the Greek word for imagination. It means “making visible.” The act of making visible makes it possible for humans to communicate with beings that are more than human. “Phantasia was the organ by which the divine world spoke to the human mind,” Robert Johnson observed in Inner Work:

From my experience I am convinced that it is nearly impossible to produce anything in the imagination that is not an authentic representation of something in the unconscious.

This book will help you connect with your inner imagineer and become scriptwriter, director, and star of your own life movies, choosing your preferred genre and stepping into a bigger and brave story.

ROBERT MOSS is the creator of Active Dreaming, an original synthesis of modern psychology and shamanism, and offers workshops on dreaming, creativity, and shamanism throughout the world. He is also a bestselling novelist, journalist, and independent scholar. More information at MossDreams.com.