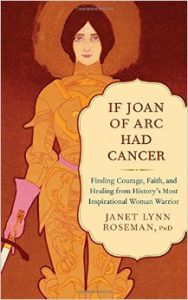 Living with a diagnosis of cancer immediately suggests the expectations of vulnerability — physical, emotional, and spiritual. This perceived vulnerability can actually be an asset, and throughout the twists and turns on the path, you can transmute the meaning of vulnerability from something less than into something more than. By its very nature, cancer cracks open the portals of life, from “what was” to “what is.” During this journey, there are no set rules to follow. You are unique and not only have opportunities to make life-changing  choices about treatment, but can rethink the types of emotional and spiritual support you need, discarding what no longer serves.

Each person on this journey has her own perspective and place of attention. The laws of physics dictate that any focus or object of attention requires energy. In this case, I am suggesting that this energy can be attentive to the spiritual and psychological components of healing — components that are fundamental to the cancer journey. The mysteries of the human being are boundless, and from my professional and personal experience, I believe that a diagnosis of cancer or any serious illness can offer the opportunity for travel on the mystical path. This sacred path is highly personal and distinctive. It is a Divine opening for discovery and can happen when one’s heart is pierced to the very core. Maximizing one’s challenges and tragedies for benefit is the essence of learning for all of us. This education can assist you in accessing an interior wisdom that can elevate your health challenges to become a force for your greater good, and during the process, activate consciousness and guide you to the discovery of the courage inside you. Many people with cancer are keenly aware of this mystical quality and have discovered that cancer also presents a transcendent aspect inside the illness. These opportunities are not confined to a particular stage of cancer, because healing has many faces.

Cancer can be revelatory and contains elements both of destruction and transmutation. The sadness of the body, and the frustration, anger, and rage at even having a cancer diagnosis, are all healthy and genuine responses, especially when one is initially diagnosed or in treatment. Expressing these emotions can be quite healing, and suppressing them undermines the therapeutic process. It is important to find a safe place for this expression, and the exercises offered in part 2 of If Joan of Arc Had Cancer, the Gateways, can provide you with that safe forum and give you permission to authentically feel without following the prevalent philosophy that you need to always be strong and fight.

Often when you surrender and give yourself permission to experience and express the full spectrum of emotions — negative, positive, and everything in between — the opportunity for a catharsis is available. It takes a courageous person to be willing to name and explore all of her feelings. However, when you give voice to true feelings, you may discover that the perceived “negative” feelings no longer possess the same power over you. The emotions you have held captive can be heard and consequently can flow through you without getting stuck in your body or psyche.

Joan of Arc knew the importance of expressing her emotions, and throughout her trial, she continued to speak of her visions, convictions, and faith in God. She adhered to her own honorable code even when she was oppressed. Her flame of courage was her strength and commitment to herself even when others were invested in her destruction.

Your flame of courage has a voice that often speaks. It is revelatory and may ask you to reclaim your personal power even when you think it is lost. Cancer requires the fight of an unfamiliar battle (or a returning battle) with a personal sword and shield, and asks you to pay attention to what you may have previously overlooked. It forces us to be attentive to our bodies, our relationships, and our emotional terrain and examine all of the details, to strip us down to the core, which is full of beauty.

The Art of Wabi Sabi

The Japanese have a beautiful word for this consciousness: wabi sabi, a concept that allows the discovery of beauty and is considered an art form. The best and most poignant description of wabi sabi that I have found is this: “the simplicity of wabi sabi…as the state of grace arrived at by a sober, modest, and heartfelt intelligence.” And the best explanation of how to achieve wabi sabi that I’ve read advises, “Pare down the essence, but don’t remove the poetry.”

This invisible connective tissue of all things, wabi sabi strives to recombine all of the elements into a form that has deep meaning. Wabi sabi is often described as the art of imperfection. The triad that forms wabi sabi is simplicity, tranquility, and naturalness. These core aesthetics can easily be a philosophy for women with cancer. Simplicity, by its very nature, implies the paring down of what does and what does not serve, not only in art, but in life. It is the simplicity of choosing what is most useful: physically, spiritually, and emotionally. The act of clearing out what is no longer needed, to form something new, is required. What could you choose? Tranquility provides us with a reassuring curative, and often an accompanying sense of contentment, no matter how our outer life appears. It can also offer a pronounced clarity. Joan’s visions and spiritual vows provided her with an invaluable sense of tranquility amid the chaos of her trials. My mother’s tranquility lived in the majestic panorama of surrender — surrendering to her feelings. The measure of her courage was often found in her vulnerability and her willingness to express that vulnerability without fear. Naturalness suggests authenticity without artifice. Joan’s extraordinary poise, and even sense of humor, during her trial were natural for her. Everyone has their own core of authenticity, though rarely do people reveal that core to the world.

Wabi sabi is the natural transformation and evolution of all things that contain not only “beauty,” but imperfection. I believe this beauty resides in the imperfections of who we are, whether we have a cancer diagnosis or not. Wabi sabi celebrates the dents, the rough edges, the scars, the wounds, the blood, the pain of cancer with all its devastation, and allows them to reorganize into something splendid. I fervently believe that these so-called woundings are actually where the beauty resides. Joan of Arc would have embraced this philosophy, for she lived wabi sabi by finding honor in the darkest of places. Can you?

Excerpted from the book If Joan of Arc Had Cancer. © Copyright 2015 by Janet Roseman. Reprinted with permission from New World Library. www.NewWorldLibrary.com