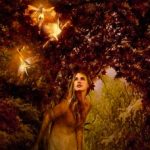 When it comes to communication with spirits from other planes, witches have an edge. Witches generally have better-evolved senses of perception, are more open to phenomena that others might attribute to an over-active imagination and are more in tune with the elements, making it easier to believe in and establish contact with elemental spirits. But for all the good things we’ve heard about faeries, are they really beings we’d like to invite into our lives?

Some say yes. In his book Enchantment of the Faerie Realm, Ted Andrews writes,

But compare that to the fourteenth-century tale of Sir Orfeo (who had to trick the King of Faerie into returning his wife to him more than ten years after she was kidnapped) or to many of the stories collected by William Butler Yeats (in which faeries spirited away young brides and newborns), and it would seem further reading is warranted before playing with faeries.

I’ve assembled a few excerpts here, each providing a different viewpoint to this engaging question. The two pages here aren’t enough to do the topic justice, so I encourage you to pick up a few books on these fascinating folk—there is a wealth of knowledge out there to help you learn more about these beings who have all but abandoned this modern, industrialized world of ours. The more you believe, the better the chances you’ll have of luring them back into our realm.

Mischievous, but not Dangerous
They cannot hurt us directly. As mentioned earlier, those of this realm have no true means of offense. They can use their abilities to trick. They can be mischievous. Faerie pranks range in intensity. They have been known to sour milk coming straight from the cow, to affect crops, and bestow ill luck when offended. It is important not to become superstitious in this.

Faeries are often known for their thefts. They can be the cause of things disappearing around the house. They are also good at rearranging articles and knickknacks. … Those of this realm are easy to work with and easy to know. If you disrespect them or an aspect of their life (i.e. nature), you may incur some disfavor. On the other hand, in honoring and respecting their homes and their life, you will incur their favor. Apply common sense, and you will find your life enriched.

How to see Faeries
Although you may not initially see them with physical vision, the places they can be found are very physical and visible. The more time you spend around such places, the greater the opportunity to establish contact.

Initially their presence is translated through the five senses. This may come to you as a scent. You may catch a sparkle out of the corner of the eye. You may find your eyes start to tear a little. You may hear a soft tinkling. The more you pay attention to these perceptions, no matter how slight or imaginary they may seem, the more you will become aware of their presence. (Also, be careful about assuming that which is imagined is the same as that which is not real. They are not synonymous.) …

The following is a list to assist you in opening to the nature spirits and inviting their presence into your life:

Excerpt is from Ted Andrews’ book, Enchantment of the Faerie Realm

Bloodless Kidnappers
Though W. B. Yeats also told stories of helpful faeries, far more of his tales reflect the darker side of faery lore, such as this tale excerpted from “Kidnappers,” from the book The Celtic Twilight (not copyrighted in the United States).

A little north of the town of Sligo, on the southern side of Ben Bulben, some hundreds of feet above the plain, is a small white square in the limestone. No mortal has ever touched it with his hand; no sheep or goat has ever browsed grass beside it. There is no more inaccessible place upon the earth, and few more encircled by awe to the deep considering. It is the door of faery-land. In the middle of night it swings open, and the unearthly troop rushes out. All night the gay rabble sweep to and fro across the land, invisible to all, unless perhaps where, in some more than commonly “gentle” place—Drumcliff or Drum-a-hair—the nightcapped heads of faery-doctors may be thrust from their doors to see what mischief the “gentry” are doing. … If there be a new-born baby or new-wed bride in the neighbourhood, the nightcapped “doctors” will peer with more than common care, for the unearthly troop do not always return empty-handed. Sometimes a new-wed bride or a new-born baby goes with them into their mountains; the door swings to behind, and the new-born or the new-wed moves henceforth in the bloodless land of Faery; happy enough, but doomed to melt out at the last judgment like bright vapour, for the soul cannot live without sorrow. …

A young man going at nightfall to the house of his just married bride, met in the way a jolly company, and with them his bride. They were faeries, and had stolen her as a wife for the chief of their band. To him they seemed only a company of merry mortals. His bride, when she saw her old love, bade him welcome, but was most fearful lest he should eat the faery food, and so be glamoured out of the earth into that bloodless dim nation, wherefore she set him down to play cards with three of the cavalcade; and he played on, realizing nothing until he saw the chief of the band carrying his bride away in his arms. Immediately he started up, and knew that they were faeries; for slowly all that jolly company melted into shadow and night. He hurried to the house of his beloved. As he drew near came to him the cry of the keeners. She had died some time before he came. …

Just like People There are Good Faeries and Bad
Witches were always thought to be on good terms with faeries and were frequent visitors to their burghs, the grassy hillocks under which faeries are said to live. … But in truth, witches must be as cautious in their dealings with the Little People as anyone else—maybe more so. After all, witches are trained to see into astral realms, witches can feel and sense these other beings around them, and witches have developed powers that many faeries also have and may jealously guard. And witches know how to banish faeries, and how to destroy them and their world. And faeries know witches when they see them, too, and they in turn know how to help or harm a witch.

What are the truths about the dangers of working with faery beings? Even pagans who have believed in faeries as something more than elemental representations have often shied away from trying to build a working relationship with them. They regard faeries as too capricious or too dangerous to trust in a working relationship. And there is a bit of truth to that viewpoint. But faeries are each different, just as people are different, and there are some faeries you want to avoid, just as there are some people you want to avoid. But just as you don’t turn your back on the whole human race due to a few bad apples, you needn’t turn your back on the faery races, either.

There are numerous faery types one should probably not attempt to seek out. But on the other hand, if you should run into them while traveling in the realms of Faeryland, there is no need to flee in terror. You may either pass on by with a mere nod of acknowledgment, or, if you are the brave type, you can attempt to draw them into a conversation (which is apt to be bizarre at best). The last thing you should ever do is run. This will only inflame their interest …

Excerpt is from Edain McCoy’s book, A Witch’s Guide to Faery Folk