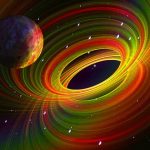 My ex-husband and I divorced six years ago, and at that time, my ex asked for my engagement ring back. He had designed it, and it is worth a lot of money. It really is gorgeous. I gave it back since it seemed to mean a lot to him. I’ve just learned that he is planning on giving it to our daughter as a college graduation gift! For some reason, this feels “wrong” to me – I guess I’m afraid it will bring her bad luck in love or something. Is that crazy? Do you think that wedding rings from failed marriages might carry bad energy? If so, should we be careful with all antique or estate jewelry? Blessings!

I absolutely believe that some objects can hold on to energy. I believe that we leave “energy trails” everywhere we go. When we walk into a room, we feel a “vibe.” That is the combination of everyone’s and everything’s energy in the room. You can also feel “vibes” from individual people or objects.

I think that whenever we bring ANYTHING into our house, be it new or old, we need to bless it and cleanse it with whatever method we feel is best. Just because something is new doesn’t mean that lots of people haven’t touched it and left energy trails on it. Objects will hold the energies of EVERYONE who comes into contact with them, and usually, that’s a whole lot of people.

I usually just put my hands on an object and ask the Universe to please cleanse and bless it, but you can ask God, the Goddess, or your own term for a higher power. I thank the Universe for bringing it to me, and command that it can only be used for love, light and good. I personally consider it blessed at that point. Some people may want to do more or less – whatever works for you is the right way for you.

I do not believe that your ex-husband giving your daughter the ring is bad luck. The ring did not bring you bad luck; the marriage ended because you two had done what you had come together to do. It was time to end the relationship. The karma between you two had been fulfilled.

When you received the ring, you were in love and had high hopes for the future. A whole lot of those hopes did come true. You two did have a very successful relationship and marriage. Its ending doesn’t nullify the success of this relationship during the years you were together.

The ring means something completely different to each of you. Your ex sees it as a sign of hope and love and joy. He also thinks it’s the most beautiful thing he owns, and the most precious thing he can give his daughter. You see it quite another way.

I will give you a solution that will work for you all. I want you to get very comfortable in a chair or lying down. Picture the ring in your head. Allow all the feelings you have about that ring to come up to the surface. Do not suppress any of it. When you are done cycling those emotions, say out loud something like, “I ask of the Universe that this ring only carry love and joy with it from here on out.”

Then you will have protected it and cleared yourself of some emotional baggage, though you obviously still have issues about that relationship. I hope this is a first step toward new healing for you.

I wish you all good fortune.

The reason you feel wrong about that ring going to your daughter is because it is an inappropriate gift for a girl her age. Your main fear is that she won’t realize its value, and she’ll lose it.

While I feel this ring belongs with your daughter, until she really gets out into the world, it’s likely she’ll lose it. If she will accept the ring and then let you put it in a safe deposit box for her until she’s older, then that’s different. Maybe she could tell her dad that she wants to keep it in a safe place until she gets married, and that you will do that for her.

When I read about your situation, I got the feeling that your ex feels he HAS to give it to her now. He may have a new girlfriend who is ponying up to get that ring from him, and since he’s not in love with the girlfriend, he doesn’t want to give it to her. Truly, he would LIKE to give the ring back to YOU, for he feels like a jerk for asking for it back in the first place.

Now he figures as long as he keeps it in the family, he’s doing the right thing. In a backhanded way, he’s trying to make some things up to you through your daughter. The poor guy thought you would be thrilled that he was going to give the ring to her. It never crossed his mind that she might lose it. I’m not saying she would be careless, but it’s an awesome responsibility for her to try to keep up with that ring right now.

I know how difficult it can be to talk to an ex. To talk him out of doing something he wants to do when it’s a gift for your daughter is even harder, because even though you’re trying to talk sense into him, you may come off as small and petty.

Talk sense to HER instead of with him. Sit down and explain to her that you don’t want it for yourself, but want to be sure she still has it when she’s ready to actually wear it. Though your daughter isn’t old enough to care for it yet, she IS going to get the ring. It would mean so much more to her if she was wearing it at her wedding than it would if some future roommate took it and pawned it for the rent! Tell her you’ll keep it safe and she can visit it any time she wants.

As far as bad vibes, you’re right, but what you’re sensing more than anything here is that it will VANISH. Anyway, all you have to do to cleanse jewelry is place it in a white dish and set it in a window with a full moon shining on it overnight. I do that with all used jewelry, just in case. I figure it can’t hurt, and it just might help.

Insist on doing that if she decides to keep it – it might even protect her from losing it, at least for a while.