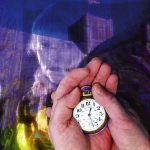 My father recently died, and when the paramedics got to the scene, they took his watch off and set it to one side. He wasn't breathing when they arrived, and they worked on him for 35 minutes before pronouncing him dead. Here's the weird thing: Dad's watch stopped at the exact time they pronounced him dead, and he wasn't even wearing it at the time! How in the world do things like this happen?

Weird things like this happen all the time. If you ever get a chance to talk to someone who is around death a lot, like paramedics, doctors or nurses, you'll hear lots of stories like this. I have heard of people seeing shadows, energy waves, light beings, etc. upon someone's death.

When my adoptive mother died, she looked up at the ceiling, smiled and said, Can you see him? He's waiting for me! When her nurse asked her who she was talking about, my mom said Jesus! and died with her arm reaching toward the ceiling, her eyes bright and wide open, and a big smile on her face. What my mom saw as Jesus I'm sure was her death angel.

Things like this happen because at the time of someone's death, there are more powerful beings in the room or area than anything else on this earth, for there are angels whose specific job is to come and collect the souls of the dying.

Everything from the Otherworld is made up of energy. When your father's soul left his body, he stopped being human and converted back to energy. Your father's watch just reacted to all the energy around his body at the time.

Maybe his death angel touched the watch to stop it so you (and other family members) would know the exact time of his passing. Perhaps your father felt it would be important to you and the family to know, and his death angel complied with his wishes.

It wasn't really that important to your father at that point, as he was prepared to go. He is very happy on the Otherside. He is whole, youth-full, and knows no boundaries. He can go anywhere, do anything, and be in more than one place at one time.

He wants you to know that he is sorry he left so quickly, but you know him - he didn't like a lot of drama. A long, drawn out death would have been too much for him.

Another reason your father wanted the angel to touch the watch was so that you and others could know that there is something more to life than what we can perceive with our physical senses. This sort of phenomenon makes everyone stop and say, Hmmmmmm.

Your father was very adamant about wanting to let everyone know what he was seeing and experiencing already. He wanted to leave a clue that there is MORE to life and death than what we can see or feel. I have to tell you that I like your dad's style!

He comes around each of you in the family from time to time. Just like he did with the watch, he uses energy as his vehicle. Watch for flickering lights and phenomena involving the TV, radio or telephone. That's the easiest way for him to say, Hey, I'm still here!

I wish you deep understanding of all that is.

When contemplating the potential meaning of a pattern of events, I like to refer to Littlewood's Law: If there are thousands, nay, millions of events in our lives measured in transparently fractal ways, then it should be expected that for every thousand events, there should be two or more events which intersect. Notice that intersection and you will be aware of a meaningful coincidence...the meaning being that two disparate parts have something in common, whatever that intersection may entail.

I know this is highly cerebral. As complicated as it may be to internalize this notion, it speaks in a direct and reasonable way to what happened when your dad's watch stopped. BIG events do have meaning - that's why they stay in our minds forever.

There are a number of possible explanations for what happened here. The simplest is the EMT who was working on your father picked up his watch to establish his time of death, and by touching the watch, he electrically charged it just enough to stop it.

People have seen this sort of thing happen many times. Your father wasn't wearing the watch at the time he died, and there isn't any way to establish the reliability of the watch before he passed away. It's possible that the watch was finicky, and the events surrounding his passing caused it to fail.

It could also be merely a coincidence, of course. Amazing coincidences really get our attention, and they naturally make us wonder if there is some deeper meaning or purpose behind them. We may then assume there is even when there isn't.

It's human nature to look for explanations to these sorts of events. The mystical answer to your question is that when your father's biological clock stopped ticking, he sent out some kind of electromagnetic field that also stopped the watch. At the time of his death, the energy of his Soul leaving his body was so strong it affected everything around it.

You might think back and look for evidence of strong winds around that time in your area. Chances are there was some unusual or notable weather during the hours prior to his death. By observing and studying these sorts of patterns or so-called coincidences, we can gain greater understanding of life and death.

I'm sorry about the terrible sense of loss you experienced when your dad died, but death happens when it happens. Depending on your own intuitions and beliefs, you will choose the explanation that resonates with you and makes the grief you feel easier to bear.

Nothing can make the death of a parent easy, but faith that our lives have meaning can lessen the sadness. Know that your dad lives on in you and the rest of your family now, for love never dies.