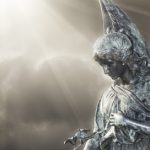 The other night I had a vivid dream. My four-year-old daughter was running around on the deck of a cruise ship and fell overboard. Although my six-year-old son was with me, I jumped overboard to save her. What was a calm sea suddenly became very turbulent and my daughter was always just out of my reach. The water swirled around us like a whirlpool, and I could then see large fish in the water circling us. I was so frightened they were sharks! I was pulled under several times but finally managed to grab my daughter and more or less surrendered to fate when we were pulled/pushed to safety by a large angel who appeared in the shape of a dolphin. We suddenly surfaced on a pristine white sandy beach. I immediately knew we were in Heaven or an alternate Universe. There was a McDonald's on the beach with cupcakes all over the roof! The dolphin changed its appearance and stood before me as an angel with dark skin and hair. (This is not what I imagined an angel would look like for some reason.) I felt this overwhelming love for him and wanted him to stay with us but he smiled and said he had to go but would always be around to protect us. My daughter and I explored the beach and I was content to stay but wondered how my son would fare without us. The rest of the dream was like something out of Narnia, but I've described the parts that really mean something to me. What could this all mean? Was that my guardian angel? Thank you.

Though this dream involved your daughter, it was more about your own fears than her well-being. There are multiple aspects to this dream; let's explore them one at a time.

Being surrounded by water indicates that this dream was soul-based, for water represents not only the subconscious but also the spiritual. It could also represent the fact that, as we go through life, there are many dangers we need to be aware of.

The threatening sharks in the water represent the dangers we may encounter in life. The dolphin who saved you and later turned into your guardian angel underscores the fact that even when you find yourself in dangerous situations, you are always protected.

Ending up in heaven or an alternate Universe suggests that you are in the midst of a spiritual transition. (It is interesting to note that what you saw may have been your daughter's idea of heaven: a McDonaldís covered with cupcakes!)

The dolphin turned angel in your dream represents your intellectual idea of what your guardian angel might look like even though he did not fit the description of a typical angel. We are the ones who determine what the spirit guides and guardian angels we can't physically see look like to us.

Itís wonderful to know they can shape-shift into any form that may appeal to us or any creature that may offer us the best protection. As a dolphin, he was able to get you both safely to shore. As an angel, he revealed himself in a form that was identifiable to you.

The general message of the dream is that you are always protected and that, when things seem worst, Spirit will transform them into something positive. Because this dream centered on saving your daughter, it may have been a way to process the normal fears most parents carry about their children. It is also possible that you have been overly worried about your daughter for some reason, for our dreams are often designed to process our greatest fears so that we can work through and resolve them.

Though you may not always be able to protect your children, this dream affirms that all of you have special guardian angels who are always looking after you.

For example, if you and your daughter died in a past life when you tried to save her from drowning, it would explain the basic plot of the dream, your intense feelings, and also your arrival in a heavenly realm after being met by the angel. Having dreams like this is one way our inner beings try to help us heal and release past life trauma.

Of course, it's also possible that this dream was you processing some recent concerns about your daughter, or prophetic of problems looming on the horizon. Water often represents our emotional lives, so it may be that you are in some deep emotional water, surrounded by perceived threats to your or your daughter's peace and happiness.

For example, if your daughter recently started preschool and has been having a hard time getting socially acclimated, you may fear that she is in over her head. Here the sharks may be bullies or other kids who are attacking her or tearing her emotionally apart. When my daughter was in the throes of adolescence, I often had water-based dreams that involved threatening sea creatures. My concern was usually how to get her safely from one side of the water to the other without her drowning or being attacked by sharks or other threats.

While the guardian angel could be symbolic of the fact that you are always spiritually watched over, protected and supported, there are a couple of elements that indicate to me that this was an actual meeting with one of your guides. The main evidence for this is your overwhelming feelings of love for this being. The fact that he didn't at all look like your own concept of a guardian angel also suggests that this was a real individual you were blessed to meet in this way.

In any case, the message of this dream is comforting and positive: no matter what happens, there are spiritual forces ever ready to help you and your loved ones remain safe on all levels.