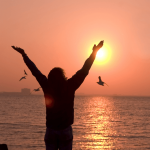 Some years ago, I was briefly involved with a guy I truly believed was my soul mate. At that time in my life, I was very responsible. For example, I always paid my bills as soon as they arrived. Then I broke up with my boyfriend and it was extremely painful; he kept me strung along thinking we might reconcile yet never offered me the the love and understanding I needed in order to patch things up. He made noises about his being a coward and avoiding things, including talking with me about our issues. I was emotionally tortured for years as I it took me a long time to realize we would never reconcile and I had to give up on thinking the two of us were meant to be. I am over him now though I still desperately wish I had not experienced the agony of that heartbreak. My issue now is this: after we broke up and I was devastated, I seemed to change a lot. I became far less responsible, often paying bills late or not at all, which of course damaged my previously perfect credit. It was like I was avoiding the bills, avoiding responsibility, and avoiding facing things. It was sort of like I had taken on my ex-boyfriend's character flaws. Does that sound crazy? Does that sort of thing happen? Or was there just something about the breakup that changed who I am? Is it a coincidence that it made me more like him? I can't explain why I started being less responsible, yet I did, and at times I feel powerless to force myself to be the way I was before. Even though I'm over the guy now, I haven't morphed back into the person I was before. Do you have any wisdom for me?

This phenomenon is more common than you might imagine. When someone bonds with another on a deep level and then loses them through a break up, divorce or death, they can subconsciously take on the traits and behaviors of the missing person.

Metaphysically, we feel loss on many levels: emotionally, spiritually, physically and intellectually. Heartbreak can manifest in many ways. Where you were once responsible, there is a part of you that feels this is no longer important. In fact, when we lose a loved one, many things can seem to lose their former importance.

Even though you have come to terms with the breakup and believe that you are over him, your subconscious is attempting to find ways to stay connected. By mirroring his irresponsible behavior, you may be subconsciously trying to hold on to him.

When we put our heart and soul into a relationship, we freely give our energy to another person. If the other person doesn't reciprocate, we can feel like some part of ourselves has been stolen. When we then hang on to the past, it's usually because we are trying to reclaim the energy we once gave away so freely.

As a Capricorn, you feel deeply and give freely. There is another trait important to Capricorns that you once possessed but have now lost, and that is extraordinary responsibility. Until you can restore that part of your life, this situation will haunt you.

It's time to make a new commitment to yourself. Being truly happy means doing the right thing for you. Getting your finances in order, taking an inventory of your bills, and making a plan to regain your sense of balance may seem difficult, but it must be done eventually.

You will be amazed at how quickly your joy and self-esteem return once you begin to address the behaviors that aren't really a part of who you are or who you want to become. If you find it impossible to make a start, ask a trusted friend to help you, or look for a support group for getting out of debt.

As you concentrate on eliminating the uncharacteristic behaviors that have arisen since your breakup, your subconscious attachment to the past will start to dissolve. Once you reclaim who you really are, you will find it easier to move toward a bright and promising future with someone else.

When we explore what's behind our emotional pain, we inevitably uncover hidden treasures. You have not yet morphed back to your old self because you have not yet discovered those gifts or lessons! I suspect they have to do with Anger and Commitment. It's certainly time to commit to yourself in a way this man couldn't.

The fact that you were emotionally tortured for years over someone with whom you were briefly involved leads me to look beyond your ex to explain your personal metamorphosis. To feel so attached to someone so quickly - to the point of calling them a soul mate - suggests that the dynamic between you felt familiar.

As a child, you probably coped with your parents' shortcomings by hoping they would change. That's a valid coping mechanism for children, but once we reach adulthood, it's more useful to see reality clearly and recognize people's limitations. While it felt devastating when he gave just enough to keep you hopeful yet never followed through with what you needed, it's important to note that you volunteered for this torture.

I'm reminded of a phenomenon called learned helplessness, which occurs when someone is repeatedly subjected to pain they can't escape, or when they have no control over their circumstances for an extended period of time. When the situation finally improves, the person doesn't take advantage of their new freedom to create positive change because they have learned to be helpless.

In a recent television interview, Diane Sawyer asked kidnapping victim Jaycee Dugard why she didn't leave her situation when escape became an ongoing possibility. Jaycee answered: It wasn't an option. On a smaller scale, you remained in an unfulfilling relationship when you could have walked out the door.

Your ex strung you along, misled you, and withheld love and understanding. You say you took on his character flaws when you avoided your responsibilities and stopped paying your bills on time. From what you wrote, it's easy to see that this man was not good partner material, yet it seems like you are punishing YOURSELF for the demise of the relationship by messing up things that are truly important to you.

Depression is sometimes called anger turned inward. Redirect your anger towards firmly maintaining wise boundaries so that you no longer allow hurtful treatment from anyone, including yourself. Turn self-destruction into self-preservation! You are not helpless. Reclaim your life one step at a time. Become the person you hoped your ex would be by exercising steadfast, loving commitment to creating the life you want to live.