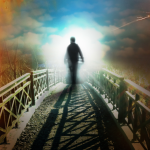 I recently learned that a man I had not seen for many years died two years ago. We planned to marry once, but due to rather complicated circumstances, we parted. I have been deeply upset ever since I learned that he committed suicide, and feel the loss as if it had just happened now. Recently I visited the town where he lived and investigated his death. I was kindly given a memento of one of his personal belongings by someone who had known him well, as well as an old photo of him. Before I learned of his passing, I had several dreams and astral encounters with him. In one, he was lying on a bed in the middle of the road, being administered to by a tall spirit being. I approached and asked if I could help. The spirit replied that I should stay with him and not let him die alone. I embraced him and pulsed energy and light into his form. I feel somehow responsible for his death, as I had known for a few years that he was living a few hours away from me but I did not contact him for various reasons, including fear of rejection and not wishing to complicate his life. We used to consider ourselves soul mates, and I feel now that he is trying to communicate something to me and I can't quite grasp it despite a dream/vision in which he appeared smiling as he bent over me and another dream in which I knocked on a white door, entered, and told him we needed to talk. I asked him why he did it, and his reply was that he was in pain. I am also afraid of holding him back by my grief, yet as soon as I feel my spirits lift, it's as if I'm punched in the solar plexus by a sense of depression and hopelessness. I am becoming rather obsessed with contacting him again and would greatly appreciate any advice or insights you can give me. Thank you so much!

It can be very difficult to accept some life-changing events as preordained by the Universe. It's important for you to realize that you did not have the power to prevent this man's suicide. When it appears we may have contributed to the cause of another's death or unhappiness, most of us are quick to blame ourselves, but I can assure you that things unfolded as they were supposed to.

Your compulsion to learn more about this man combined with your dreams and feelings that he is near speak to the fact that he is indeed attempting to connect with you on a spiritual level. The dreams you had after his passing were attempts by him to comfort you and reassure you that you were not to blame.

If you desire, you can contact him through a channeling session with a psychic who specializes in spirit communication. I feel that once you connect with him in this manner, you will feel much better about what happened.

When two people share an important part of their lives with each other, the connection never fades. From the dreams you had before his passing, you can see that you were and always will be connected on an energetic level. The love you shared will always be with you. However, the regret you carry is not based in reality. There were very solid reasons for the two of you to go your separate ways.

Because you were blessed to receive a photo and memento of him, you carry a part of him with you. When you feel this sense of depression and hopelessness overcoming you, you can meditate with these items and send loving energy to him. As you do this, these heavy feelings should leave you.

It may be hard to imagine at this point, but with time, the feelings of loss and guilt you carry will fade, and only the joyful memories will remain. In the mean time, it would be helpful to honor the life you shared together by sending him love and positive thoughts. If in fact he is stuck and has not moved into the light, you can also encourage him to move forward so that he can begin his new life in spirit. You will still be able to sense his presence and connect with him on a spiritual level.

I can assure you that though he felt he had no choice but to leave this world, he is much happier now. His reasons for taking his own life had nothing to do with you, though he has his own regrets about what happened. If you can forgive him and yourself, his transition into a new new spiritual life will be much easier.

These dreams sound wholly positive to me. Initially, he just wanted you to know he had left this world so you wouldn't be shocked when you heard the news. The first dream reflects what happens to many suicides: they receive spiritual healing and spend some time recovering from the emotional distress they've suffered. Once he had recovered, he reached out again to try to explain his actions and let you know he is okay.

You wrote that you are obsessed with him. As obsession is one label for spirit attachment, my first thought is that you should beware of attachment by his spirit. You may be thinking of him because you're still processing his death, but it's also possible that he is reaching out to you because he is lost in the astral. If you are reaching out to connect with him and he doesn't know where to go, it's easy for him to attach to your aura and ride piggyback with you through life.

If this is the case, the depression and hopelessness you feel may not be your own but the same despair he felt that led him to commit suicide. It can be difficult to sort our own emotions from those we are picking up from the people in our environment and the disembodied spirits and energies in the psychic atmosphere.

Even spirits who love us can have a negative effect on us. Someone who is depressed may be too caught up in their own pain to worry about bringing us down; the same thing can happen with beings who have left this world.

While your grief is understandable, your approach may be encouraging him to attach to you. I feel what you need is not an ongoing relationship with him but healing and closure so that both of you can move on with your lives in separate dimensions. Since love never dies, this won't end your relationship: you will be drawn back into each other's experience in future incarnations when the time is right.

Above all, you must let go of feeling guilty about not preventing him from killing himself. If you think about this clearly, you will realize that none of us has this power over any other person. The right to live or die is the ultimate freedom; if someone is determined to take their own life, there is nothing anyone else can do about it.

While there are other ways to get the closure you need, it sounds like you are adept at remembering and working with your dreams, so I recommend you program yourself to meet with him in your dreams in order to find the peace you both need to move on.