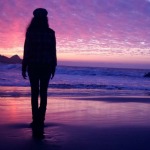 I keep having recurring dreams of a boy who was in my middle school class 18 years ago. When we were classmates, I had a crush on him. I saw him a few times before I left home, and ever since then, I've had recurring dreams of him. In my dreams we are a couple. Recently, I was deployed to Iraq, and I happened to bump in to him! I thought I was dreaming! I got back from Iraq a month ago, and I haven't had any dreams about him since. What does this all mean?

First I'll offer the most reasonable explanation for you two running into each other in Iraq: Since you grew up in the same place and have the same backgrounds, you're very similar, so it would make sense that you might both decide to serve your country via the military.

Something in your early experiences planted that seed for both of you, and coming from the same generation gives you similar views on things. Your choice of career was no doubt directly and powerfully influenced by experiences you both had growing up.

In my view, the metaphysical explanation makes just as much sense as the rational one; in fact, I feel the reason for all of this is more spiritual than mundane.

The two of you have known each other many times in many different lives and situations. Long ago, you were soldiers together in some far off places. You certainly share a bond that goes way beyond this lifetime.

Since you've done this together before, it was natural for you to choose to do it again this time around. Even without knowing that this person was part of your Ka-Tet or Karmic family, you found each other again.

An event like this happens to reinforce your own beliefs about reincarnation and other spiritual truths. You can use this gift to better tune in to the others around you. For reasons known only to the Universe and your guides, your Karmic family is working very hard to reunite.

Soon there will be other people coming into your life. Some you know from this incarnation and others from past lives. Some people will be all new to you, and some you'll recognize on a soul level as familiar in some way.

While I know it seems highly unlikely that you would meet someone you knew so long ago halfway around the world, it does happen, for the Universe has a way of putting people into our paths when and where we least expect to see them.

Your own experience illustrates that it doesn't matter how far away your Karmic family strays, you are still going to be naturally brought together from time to time no matter where you are and what you are doing. Learn from this great experience and allow it to reinforce your awareness of the enduring nature of Karmic relationships.

It's fascinating when certain people from our childhood reappear in our lives over and over, and in some of the most unlikely places. Usually these kinds of events are fairly random, but they can serve as reminders that there are special people in our lives to whom we will always be connected on some level.

Since you've known this man since middle school, your dreams and interactions with him could be taking you back to a time when your life was simpler. This in and of itself can influence how you feel about him and your life in general.

It's possible that you shared a past life with this person as well. Your crush on him as a young girl, the dreams you've had, and running into him halfway across the world suggest a past life in which you were a couple or perhaps a lifetime when the two of you fought in battle together.

It's interesting to note that most people reincarnate in the same groups, so they are surrounded by people with whom they have shared many lifetimes. This is one of the reasons we tend to be attracted to certain people and repelled by others for no apparent reason.

There is a good possibility that you two will cross paths again when the time is right, as it appears that the connection between the two of you is very karmic. Sometime in the near future, you may start having dreams about him again, hear news about him through a friend, or accidentally cross paths with him in some out of the way place.

If this is a soul mate connection and the two of you are destined to be together, it will happen naturally when the time is right, with no effort on your part. Many couples cross paths for years before they finally make a lasting connection.

To discover more, the first place to start would be with a past life reading. If you'd like to explore this connection with me in depth via a private reading, you can email or watch for me on line at here at Kajama.

Once we've reviewed your past life connection, we can take a look at what might lay ahead for you romantically, and whether this man will play an important role in your future. In the mean time, give thanks that you have such a wonderful, mysterious, fascinating connection to this man.