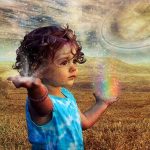 I have a two-year-old son and a four-year-old son, and both have at different times relayed messages from their deceased Uncle Bob. The two-year-old, Xander, recently woke up at 11:30 p.m. and refused to stop talking, saying My Uncle Bob! Uncle Bob has letter in bedroom. I need tell Gramma. Uncle Bob lay floor, Gramma see him. (These seemed to refer to the circumstances of Bob's demise.) Xander was 10 months old when Uncle Bob passed away; he did not know him or remember him, but he can pick out Uncle Bob in family photos. Brennen, my four-year-old, had predicted the arrival of a baby girl with black hair and dark eyes long before the birth of our sweet baby girl Anjali. Shortly after Bob's death in 2008, Brennen would stop by the bedroom window and talk up towards the window and wave to it as if Bob was there. He had also run into the room where Uncle Bob died and locked himself in there, and we could hear him conversing in what seemed to be a one-sided conversation. He would sit and talk, then be quiet, then he would respond but we couldn't hear anything in between. Are my boys psychic or am I imagining things? They seem to know things before they happen.

We all have psychic abilities. Whether we choose to trust in and develop them or not depends on our experiences as children. If these gifts are encouraged, they tend to grow. If they are discouraged, we learn to block them.

Young children are very open to psychic phenomena and can often see or hear spirits more readily than adults. Because they haven't been taught to ignore or fear these phenomena, they engage them freely and naturally. What you are witnessing with your two sons is perfectly natural, so I recommend you encourage it. One of the greatest gifts we can give our children is to help them acknowledge and develop every natural talent they possess.

This is not your imagination; that's just one of those things adults say when they don't understand something and can't explain it. The fact that they are interacting with a relative and have accurately described their uncle tells me that they are engaging with a safe spirit, which means you have nothing to be concerned about. Since their stories have proven valid, it would seem that Uncle Bobís spirit is residing in your home and near your family. There is no reason to doubt what they are telling you, and no reason to fear this situation.

Your older son's prediction about his baby sister also proved to be valid. Most likely, his uncle showed him what was going to happen, and he was happy to relay it to you. Your two boys may come to you with other predictions which in time turn out to be true.

It's highly likely that your sonsí conversations and interactions with Uncle Bob will begin to diminish soon. Your uncleís spirit will move on and the boys will begin to develop other interests. What you want to watch out for is if they start conversing with other spirits. Once spirits realize that they have a captive audience, they may try to monopolize their attention. If you begin to hear stories unrelated to the uncle, you'll want to step in and investigate further.

You can encourage your boys' psychic abilities by listening when they come to you with information and accepting what they say without judgment or fear. Their revelations may astound you, but reassuring them and validating what they are saying will keep them from trying to hide information from you or deciding they need to hide or try to repress their gifts.

I think all is just what it seems to be: you have two very psychically sensitive boys whose deceased uncle has been interacting with them. Most little kids are much more psychically open and aware than adults, which would explain why your boys are able to perceive Uncle Bob even though you are not.

While it's possible that the uncle is passing information on to the boys (such as Brennen's prediction about his future little sister), that isn't necessarily the case. Your boys must be psychic to interact with him in the first place, so it makes sense that they could pick up information about future family events. I bet Brennen has a deep past life connection to Anjali, and was very excited to learn that she would be joining him in the family again.

It does sound like Uncle Bob is unusually present. That your son saw him where he died suggests he may not have moved on. It sounds like Uncle Bob showed your toddler things like how he was found when he died in order to provide details evidential of his identity. In other words, he wants you to believe that he is really there. Spirits provide mediums with details like this in order to convince the living that they really are the ones coming through.

Further, your son saying that Uncle Bob has a letter and that he needs to tell Gramma about it strongly suggests that Uncle Bob is trying to get a message through and is using the boys to try to achieve this. This is classic behavior of an earthbound spirit who can't move on because there is some unfinished business here that they want to see taken care of.

For example, if your brother committed suicide and no suicide note was found, he may be trying to say that he did write one and point you toward finding it. If he didn't commit suicide, it may be that he wrote something before he died that will prove comforting or meaningful for you, and he very much wants you to find it.

Spirits are often very frustrated in trying to get our attention, so they will seek anyone around us who may be able to perceive them and then go to great lengths to get that person to relay their message. Since you have some very gifted little mediums living right at home, you might put them to good use by having them ask Uncle Bob if there is something he wants to convey or something he needs from you all.