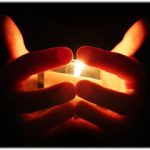 My mother-in-law passed away at home. She was only 41 when she died from cancer. At the exact moment she left us, the lights went out. They were only out for about a minute or two. We all believe she didn't want us to watch her go so she turned the lights out for us. Is this possible or are we just being sentimental? There weren't any power outages in our area at the time, and no one could have flipped any switch because it was the entire house that went dark.

When people transition from a physical form to a spiritual one, as happened when your mother-in-law passed away, they will often draw on electro-magnetic fields to help themselves cross over. This would explain why all the lights in the home went out for a few minutes upon her passing.

People have reported this type of phenomenon as well as clocks stopping at the time of death or being suddenly awakened at the exact moment of someoneís passing even if the person passing was miles away.

Most paranormal researchers agree that for spirits to manifest, they must draw upon energy sources nearby to make their presence known. Along with electrical power sources, batteries can be drained, devices can mysteriously turn off, and all the warmth in the atmosphere can disappear. These same things can happen when one is in the process of moving out of the physical body and on to the next plane of existence.

Because these synchronicities happen so often, it seems that people who are passing over often have a higher spiritual awareness of what is going on, and can either consciously or unconsciously send a special message to loved ones who are left behind. While it's possible that your mother-in-law did not want anyone to witness her cross over, it is more likely that she was simply using all the energy available to her to make this transition.

As we become more aware of the spiritual mysteries of life, certain patterns become evident. If you research this a bit more, you may also discover other signs or events that suggest your mother-in-law knew that her time was near. Statements that she made a few weeks prior to her passing or activities she engaged in could also give hints that she was preparing to pass over.

Now that your mother-in-law resides in the spirit world, she may use this same phenomenon to let you know when she is near. If lights flash or the power goes out for a short time for no apparent reason, she may be trying to get your attention.

You may also be able to contact her through a channeling session. When you would like to connect with her, begin a meditation session and after a few minutes, flash the lights off and on or blow out burning candles and then relight them. This will be a special way you can signal to her.

With some practice, you should be able to feel her presence near you. This may also open the door to a conversation with her so you can affirm that she is doing well and watching over you from a higher plane of existence.

If you research the term deathbed phenomena, you'll learn that all sorts of wonderful things can happen during the special moments when a person is in the process of leaving this world.

Perhaps the most common is for the dying to report visits from loved ones who have already died. They may suddenly become very alert and stare into what seems to be empty space. They may talk to people no one else can see or describe the presence and appearance of departed loved ones.

Usually they indicate that these spirits have come to comfort them and help them cross over to the other side. In many cases, at least some of the living people present have also seen these spirits or seen lights or other strange phenomena where the spirits are supposed to be.

Often the dying will suddenly become very conscious and alert even after being in a coma for an extended period of time. It is as though they come back to this world for those last few moments so that they can bid the living goodbye.

Electrical phenomena are very common surrounding the moment of death. Many families and hospice workers have reported clocks stopping at the exact moment of death or lights flickering and going out as the last breath is expelled. Some have even seen a misty shape leaving the body at that time. Often these electrical devices will begin working fine again some time later for no apparent reason.

There have been cases that involve cell phones, television, computers, cameras, and all sorts of other equipment that suddenly turn on or off or cease to function at the moment that someone dies, only to begin working again some time later. As the same phenomena can be seen with equipment when spirits are trying to communicate with us, it may be that the dying are drawing upon the electrical energy around them in order to transition or in an effort to give us some sign or message.

If you all feel that she purposefully knocked the power out so that you wouldn't witness her final transition, I think it's wise to trust that intuition. It may be that she was trying to distract you from that painful moment while at the same time giving you a fascinating sign to boost your faith in the afterlife.

I think it's wonderful that your whole family was able to witness the power going out. Too often amazing deathbed phenomena are only experienced by individuals who are alone with the dying, and are so subjective in nature that after some time, they begin to wonder if their minds were playing tricks on them.