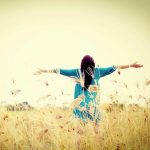 My ex has been in my thoughts and in my gut for almost 10 years now. I feel him pulling me and calling to me in the same way that I felt him long ago when we were together. These days, it seems to happen at random moments. I feel like there's a connection I can't let go of, like even though the relationship ended, it is still very much alive and ongoing. I meet other men and fall in love, but those relationships always end because the connection is just not the same. All the while, I feel like an umbilical cord is linking me with my ex. We broke up because he was lying to me, but maybe that was because he felt trapped. I don't know; I just know that closure never happened. I have recurring dreams in which he's using my bathroom, and it looks like it did back before it was renovated. I stop in the hallway to ask him why he's peeing with the door open, and he turns his head and says, I still think of you or I still remember you. More often, I have dreams of hiding in his house with his new wife and he finds me and holds me and tells me he still loves me. I don't know what to think about all of this.

When two people develop a relationship, they subconsciously exchange energy with each other. When a relationship ends, the person left behind may continue to feel attached to the other person for a long time. Your ex still possesses the energy you gave him, and a part of you wants it back. This may be the root cause of your inability to release him. Since he is married and has moved on with his life, it's time for you to cut the ties too.

The following ritual is effective for cutting ties and reclaiming your energy.

Ritual to Release a Past Love

Place the candles in front of you, arranged left to right: blue, green, yellow. Place a small bowl in front of each candle. Fill the center bowl with water. Light the incense wand and then the candles. Place the three bay leaves in bowl one, placing the quartz crystal on top of them. Set the apple in the third bowl. Lay the three pieces of rope, scissors and salt container in front of the middle bowl.

Remove a bay leaf from the first bowl, sprinkle it with salt, and then drop it into the water bowl. Focus on the blue candle, holding the crystal in your left hand while you meditate on the relationship you are ending. This will clear any compulsions to stay connected to the person you are releasing.

Next, repeat the process, focusing on the green candle. Meditate on the emotional aspects of the relationship; how it made you feel, and what was lacking in the heart. This will help you to release any pent up or lingering feelings you still carry for this person. Take the last bay leaf and focus on the yellow candle, meditating to draw your personal power back to you, where it belongs.

To complete the ritual, eat the apple. With each bite, think of one reason you are grateful this relationship is completed. Continue until the apple is consumed.

You say other relationships have ended because the connection was not as strong as the one you had with the ex in question. May I point out that the relationship with him also ended? You've heard the saying, When the student is ready, the teacher will appear. Likewise, when you are ready for love, a suitable partner will appear. The search for love is not out there so much as in here, and a big part of readiness involves psychological and spiritual health.

Perhaps you need to be more discerning of people's characters and not take the blame for their bad behavior. You weren't responsible for his lying, but you may have played a part in all that unfolded, so you may need to examine what might discourage people from being honest with you. For example, are you controlling? Do you over-react?

If you feel a lack of closure, write him a letter (no need to be polite) and read it out loud to an empty chair, friend or therapist. Pay attention to your emotions and physical feelings as you do so, and then think about what they remind you of from your early life. I suspect you feel an umbilical cord linking you to your ex because this is really about your mother or father. The distant past is where you may need closure.

A man holds his penis while urinating. Symbolically, this suggests that he was self-centered, embracing himself and not you, and that he dumped his toxic waste into your life. You don't want to look at his faults, so you asked him why he didn't close the door. On the bright side, this scene took place prior to renovations, meaning you've grown and changed since that time. It's time to flush the past!

You fantasize that he remembers and loves you, which sounds like the yearning of a child whose parent was abusive or neglectful. In your dream, the two of you are hiding from his wife and keeping a secret. Was there an affair in your family? Was your relationship with this ex an affair, or did he have one? The prominent role of his penis in your dreams suggests you at least wondered about that.

Obsessions help point us to the emotional wounds within us that need our loving attention. That you are wanting someone who belongs to someone else suggests that the parent whose love you crave seemed to give that love away. Perhaps you felt jealous of a new sibling or a new love interest in your parent's life.

You don't have to hide to get your needs met, as you do in your dreams, nor deny yourself love in the present. Let this old connection provide you with clues regarding the pain you need to heal so you can attract complete love now.