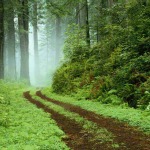 A relative told me that when she was a young woman, she saw a very old woman who was hunched over, carrying groceries. The woman asked her for help carrying the bags up to her apartment, which was on the third floor of a nearby home. She wasn't afraid to help because the home belonged to her uncle, who lived on the first floor. Feeling sorry for the woman, she brought up the bags and noted that the ceiling was slanted as if this were an attic. She placed the bags down and left. She later told the story to her uncle, who replied that there was no one living on the third floor. She insisted so much that he had to take her up there to show her that there was a solid wall where the old woman's apartment had been. She never saw the old woman again. Similarly, my acupuncture instructor shared a story about an unusual old woman who had shown up as a patient in his office. He began to treat her for a sciatic condition and she did not respond. She said to him, Water would put out the fire, which made him think to take a different approach, and she began to heal. One day when she didn't show up for her appointment, everyone was concerned. They called her phone number - no answer. They then drove by her address, but it was an empty lot. She was never seen again. I would very much appreciate your opinion on this sort of phenomenon.

I love your story - it's just fabulous! I absolutely believe that spiritual beings can manifest in human form. I have heard stories like these over and over again throughout my lifetime. I have also experienced something like this myself.

I know some of you will remember this tale. When my daughter was a newborn, I was taking her to my father's house for a visit. I had to drive about five hours to get there, and I was obviously very tired, since I had a brand new baby and no one to help me. As a result, I fell asleep at the wheel.

I then heard a horn honking loud and steady, and I snapped awake just as I was running off the road, where there was a guardrail and a cliff. Had I not awakened when I did, we would have died.

I looked over to my left for the car that had beeped, and all I saw were big brown eyes staring at me. I know there was a male face there with dark hair, but all I could see were those incredible eyes.

I looked over at my daughter to make sure she was okay, and when I looked back to wave and thank him, there was no car there. I looked in my side view and rear view mirrors, and looked ALL around, and there wasn't a single other car on the road. There were only a few seconds between the first look when he woke me up and the second look to say thanks.

I know this driver was sent as a guardian. He was not human, but he appeared in human form.

Sometimes we have guardians show up to help us in times of danger like this. Sometimes we encounter people who are stuck in the past, like the woman with the groceries that your relative met. Sometimes spiritual beings come to deliver messages to us - there are all sorts of reasons they take human form.

In the case of the acupuncturist, the old woman came as a teacher for your instructor. He learned something important from her, something that he will be able to use to help others many times in the future.

The Christian bible even describes how angels will come to us in human form, so we never know if a bum on the street begging for food or money could really be an angel or some other spiritual being. We should all bear this in mind before we judge someone based on how they look.

After the angel saved my life that day, I have always wondered if the people I see are ordinary humans, or if they are from another place. I also know that in many cases, beings will come to us for help of some kind when they're really there to teach us some kind of lesson. For example, I bet your relative was awakened to all sorts of new possibilities when she helped that old lady carry her groceries that day.

I wish everyone the eyes to see more!

All of the world's religions have stories about angels and spirits who visit the Earth. In the Jewish faith, there are many tales about this in the Old Testament. The one that always sticks out to me is the story of Sodom and Gomorrah, in which Lot is warned by angelic visitors to leave and never look back.

Abraham is often visited by angels who appear in the guise of men too. An angel comes to Sara to tell her she is with child despite her old age, and in the New Testament, the Archangel Gabriel appears to Mary and tells her that she's pregnant with Jesus.

In the Bible, angels are everywhere personified in human form. Part of the intrigue of those stories is how these angels appear to be so real as to be indistinguishable from ordinary humans.

In ancient Greece, gods and goddesses appeared not only as men and women, but as swans, bulls and other animals. Heck, Zeus fathered heaven only knows how many kids disguised as other creatures! Sometimes the humans in these stories have some idea that their visitor is divine in nature, but most of the time, they are portrayed as clueless when it comes to recognizing angels.

Angelic spirits often take on human form when they visit this dimension. They come to check us out, bring us messages, or take care of us in some way. The old woman in your story about acupuncture is definitely an angel who came to teach that healer an important lesson about his work.

Perhaps there were other people around her during her sojourn here who also benefited from contact with her. Maybe the people around her were supposed to look for her and try to find her when she disappeared, so they would pay special attention to her message. Either way, the kindness and concern those people showed that woman while she was here will garner great rewards for them.

There is a reason we don't recognize angels at first. If angels revealed their true identifies to us up front, we would be so in awe, it would be impossible to learn all they've come to teach us. We're not supposed to recognize them for who they are, at least not at first.

I think it's a fine plan to treat everyone as if they were the Christ. It's a great way to put that whole love one another notion into action. If we all did that, the angels could stay in heaven, singing and dancing and not being so troubled with us here on Earth.

Your question is MY Jesus for the day. Thanks for asking it!