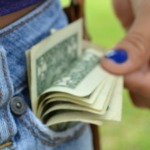 For the past month or so, my boyfriend and I have had money seem to just disappear from the house and even the car a number of times. The first time was over $500, and I believe that one of my boyfriend's "friends" took it. A psychic confirmed this. The second time, my boyfriend dropped me off at work, and I left $250 in my glove compartment. There were three people in my car (including my boyfriend) while I was gone. Later I noticed $200 was missing. Shortly after this, I noticed the $2 bills my boyfriend and I had been collecting were missing from my closet. Mind you, I have been very conscious of who comes into my home. Finally, last night while my boyfriend made me dinner, I counted my money three times. I sat on the bed while doing this, and put the $360 I had counted in my pants pocket with a tight rubber band around it. My boyfriend had no knowledge of this because he was downstairs cooking me dinner. After dinner, he came up and we went to bed. I kept waking up during the night with a weird feeling. In the morning we both got up at the same time, and he left before me to take his brother's girlfriend to work. I noticed that my pants weren't as I had left them, and $100 of the $360 was missing. I immediately called my boyfriend and asked if he took any money out of my pants. He told me no, that anytime he needs money, he always asks me and wouldn't just take it. Now I know it looks like he's been doing it, but I don't feel that in my heart. Am I going nuts? The reason it was in my pocket was because I was taking it to the bank the next day. Help! (I was born on 10/30/81. My boyfriend was born 5/12/74.)
Jessica

Jessica, there is one common denominator in all of these stories: your boyfriend. I know you don't want to believe it, but it sure looks like he is the one who has been taking your money.

As far as the first loss goes (the one a psychic confirmed for you), I do believe one of his friends took it. Once your boyfriend figured out how easy it was to steal from you, however, he started to as well. He may even have been an accessory to the first robbery. At the very least, he found out after the fact and didn't make his friend return your cash.

One thing concerns me even more than your boyfriend stealing from you. It's the following line: "He told me that anytime he needs money, he always asks me and wouldn't just take it."

So you just give him money when he asks for it? Why would you do that? Are you married? If you are handing out money so freely, may I please have some? If you have to buy someone's affections, you're going end up empty-handed.

I want you to also consider that your boyfriend could have a substance abuse problem, and this may be why he is stealing money in the first place. This problem has him burning through his own money, the money that he asks you and others for, and even the money he now takes wherever he can find it. It's time for you to become aware of what is really going on with him.

Some symptoms of a substance abuse problem include:

Please face the truth and do something to save yourself.

I wish you enriching relationships.

I'm not inclined to think your boyfriend is taking your money, even though it would seem to be the most logical explanation. A Taurus is usually too truthful and honest to do something like that, especially when someone they love is involved.

I CAN tell you that it's not a Spirit manifestation of any kind, and that money doesn't walk away by itself. The thief is someone who comes in and out of your home, and even has a key to do so. It might be a landlord or a security person, but I seriously doubt anyone like that would take the chance of being discovered, or do something like that over and over again. Also, this person has a key that you don't KNOW about and didn't GIVE to him - he stole that too!

I feel the psychic who told you that a friend of your boyfriend's took the money was right. I got a very funny feeling when you mentioned that he left to take his brother's girlfriend to work. Whoever is taking your money at your home also rides in your car, so this is someone you think you know well. Also, I feel it's a man, not a woman. This person also knows your paydays and the day of the month when you're most likely to have a sizeable amount of cash in the house.

Unfortunately, as long as you have that much cash in your possession, you're going to be a target for theft. Putting a tight rubber band around those bills isn't going to keep sticky fingers out of your pockets! Thieves know all the right "hiding places" for cash. Most of us are pretty predictable about where we hide things.

The best and most efficient way to put a stop to this is to stop having any large amounts of cash in your home for a while. Get a new bank account that does not have an ATM card to go with it, as that could be stolen. Keep your checkbook under your pillow at night for a while, and NEVER leave cash in the glove compartment of your car!

The most cash you should keep on you is about $20. Change all the locks on your doors so that this person who has copied your key doesn't have access to your home. Move any collections of change or $2 bills to your parents' house.

My grandmother used to say that it was just as much a sin to leave temptation to sin lying around as it was to fall into the sin itself. All that cash is just too tempting for someone in your circle to resist. While you are not to blame for this thief's actions, if you don't have money around, no one will be tempted to steal it!