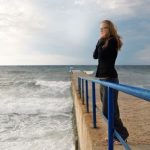 I recently saw an episode of The Ghost Whisperer that sort of freaked me out. In it, there was a dark entity like Satan that was battling for all the souls of the people who had died in a plane crash. I always thought that our own choices and actions would determine what happens to us after we die. Is there some dark force or being that may try to steal our souls away when we cross over? Is there really a battle between "good" and "evil," like a competition to see which side can get more souls? Thanks for your advice!

I just knew when I watched that episode that it was going to make people wonder about this, and fear that there is some dark entity like Satan out there fighting for our souls. I'm sure that like many Christians, there are lots of people who truly believe that Satan is a singular entity that exists and is very powerful in today's world. However, as I discussed here a few weeks back, the "devil" was created during the Crusades.

After a successful hunt, pagan people had a tradition of giving thanks to the God of the Hunt. The God of the Hunt was depicted as having a man's face and body, but also antlers. He had the leg and cloven hoofs of a deer. The Crusaders took that image and turned it into a devil - an evil being that would steal your soul, complete with horns, cloven feet and a tail.

Of course there are dark forces at work. With light, there is darkness; with day, there is night; with right, there is wrong. Everything has an opposite.

So rest assured: there is no dark man in a dark cloak running around, trying to steal your soul.

If you ever feel any negative or evil force around you, simply stop, breathe and say, "I command you to leave this space in the name of God (or whatever name you choose for the higher power put your faith in)."

The area around you will then be clear of all negative entities. This also works for just clearing out any space, whether it feels negative or not. This statement is your spiritual armor against any force you feel is dark or negative in any situation.

There is definitely not a battle being waged for the souls of the newly departed. When we die, our souls all go to the same place. We get debriefed on what we learned in this life, what we did wrong or could have done better, and we begin to prepare for the next life.

When we finally learn everything our soul has to learn, we ascend, and do not come back as a human any more. Hell is something we choose to live in LIFE, not in death - but that is another column.

I wish you knowledge of higher truths.

In a world where Christian churches are showing The Da Vinci Code to their followers with as much rabid glee as they presented The Passion of Christ, it doesn't surprise me that you were freaked out by a weekly television program.

You should write to the show, because that's probably the response the writers were trying to elicit from its viewers: Fear. People LOVE to scare themselves with thoughts of the Devil!

I haven't seen that episode myself, but SO MANY people have brought it up with me in conversation that I must try to see it when it repeats, or get the first season on DVD when it is released.

During the days before and after 911, most of the psychics I know (myself included) were bombarded with "voices." I don't like to think about that time, but I can tell you, EVERYONE in that massacre went to heaven just as quickly as they could accept that this was where they belonged.

Not many of those souls hung around, wandering the lower astral. God "took them up" in the way that the Christian fundamentalists perceive "the rapture," except for one crucial difference: God takes EVERYONE, not just the people who fit some abstract idea of "good." Those people were ALL rewarded with fast and easy entrance into Paradise. It was the least and the best God could do for them.

The battle between Good and Evil is probably the first and oldest story of humankind. It's a great story, too - so many things can be taught with it. We learn about choices and the consequences of those choices, which is one of the basic lessons of life.

Television, movies, and literature all love to push the scary idea that there is a battle being waged for our souls. Unfortunately, shows like The Ghost Whisperer have done a lot to mangle and misrepresent what really happens when a medium encounters an earthbound spirit.

When a person is "lost" between worlds, it takes more than 48 minutes (not counting commercials) to help that soul cross over to the Other Side. Some people go so far with evil, unethical behavior that when they die, they don't feel they deserve to be in Paradise.

All the world's religions have their own versions of the story of the battle between good and evil, and they all end with the people who made poor choices suffering. What a shame that we are taught through fear of pain and suffering instead of desire for Spiritual Harmony.

Personally, the only battle I see that is being waged for our "souls" is going on within us. We try to live a moral and ethical existence. When we don't, the Devil doesn't win, but we certainly lose an important part of ourselves.