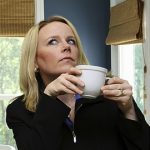 Whenever I get into a trance state, I see visions. When my boyfriend is around, sometimes I see images of women that are sexual in nature. Does this mean something bad or is he just being a guy? Are my visions telling me something like a prediction, or is this more of a telepathic feed? Also, how do I know these images are coming from him? Thanks!

You know these visions are coming from him because they only occur when he is around. Even if they are coming from him, however, they may not have anything to do with what is happening in reality. More than likely, the images of women you pick up from your boyfriend are simply a part of his biological makeup. You can't assume from these general visions that he is involved with other women. However, if your visions begin to feature a specific woman or a scene in which your boyfriend and a specific women are involved, you may want to pay closer attention.

When people first learn the art of going into a trance, the visions they experience tend to be random. When I first learned to read a crystal ball, the ball flashed from image to image. It was similar to watching TV when someone else has the remote and is constantly changing channels. The images meant nothing to me. As I continued to practice, however, more meaningful visions appeared.

It sounds like so far, you have merely been allowing any and all visions to come to you. This is also common when one starts channeling. When we open ourselves up to new realms, all sorts of spirits or images may come to us. Setting up boundaries by directing your trance or channeling sessions is very important. You can do this by requesting that only certain things be revealed to you. I recommend you fine-tune your experience by directing these visions. For instance, as you go into a trance, you can ask that you see into the life of your boyfriend, family members or the future.

You must be careful not to take these visions to heart unless you have some tangible proof to back them up. However, if you begin to have visions of certain events that then come to pass, you'll know your visions have moved to the next level. When this happens, you can start to rely on the validity of your visions more.

Once you have had a vision, you will want to do some background work to validate it. For example, if a loved one is sick and the doctors can't figure out what is wrong, you may ask for a vision regarding the source of the problem. Based on what comes to you, you may offer some suggestions to your loved one regarding what the doctors investigate next. After they have explored your suggestions, you can check back in with your loved one to determine if your vision (or your interpretation of your vision) was accurate or not.

Another example would be to visualize something you have misplaced. See if a vision can reveal where it is. If your vision is accurate, you will find it in the place you were mentally shown.

I recommend recording your visions in a journal. This will help you keep track of which ones come to pass and help you determine if a particular vision is something you need to take seriously or not.

When our interests are in jeopardy, our intuition will try to warn us. This is why we go on psychic alert when others are lying to us and when we are in danger of some kind: When our need is dire, instead of whispering, our intuition will begin to shout.

What you are experiencing is a primal instinct similar to a mother's intuition. As your relationship is very important to you, your psychic instincts are trying to help you ensure its survival. Whenever anything occurs that could threaten something you treasure, your instincts will poke at you to get you to pay attention.

It can be hard to hear our intuition when we are caught up in external events, so when we get meditate or go into a trance as you say, we may immediately start to receive messages from our intuition or telepathically pick up on what's happening with the people around us.

To answer your question, it sounds to me like this is just your boyfriend being a guy, as you put it. I'm basing this on the fact that these visions only occur when he is around, and you not mentioning any other reason to worry about his fidelity. It is a natural male instinct to want to mate with as many females as possible, which causes many men to fantasize about other women. Just because this drive is there doesn't mean he is acting on it; we all have base impulses we squelch on a regular basis.

If these visions only happen when you are out in public or around attractive women, I would assume that you are simply picking up on fleeting fantasies. However, if this is happening when you are at home alone with your boyfriend (and he is not in the other room looking at pictures of naked women on the internet while you are meditating), then it may be a warning of some kind. If you were being warned, however, you would receive these visions whether your boyfriend was nearby or not.

Since we can't control what others choose to do, it's foolish to make yourself crazy over these visions. That being said, you might as well make good use of your ability to read your man's mind by dropping subtle hints that you know what he is thinking. This will keep him on his toes and may even scare him into cleaning up his thoughts! For example, if you sense him checking another woman out, you might say, She's lovely, isn't she? If you catch him fantasizing, you might say, How often do you fantasize about other women, my love? (This is the fun and entertaining side of being psychic!)

Of course, being too psychically open can create all sorts of confusion and make your life harder than it has to be. If these visions are upsetting you, you could ask your guides to only make you aware of what you really need to know. Then if you have a vision, you'll know it's something you need to take seriously.