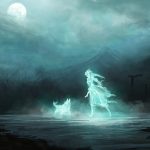 I recently spent a couple of week's at a friend's country house, and the most amazing thing happened while I was there. She has a dog, Mandy, that she dearly loves. One day as we were working in the yard, we heard a loud yelp, and when we turned to look, we saw her dog flying through the air - it had been hit by a passing car! We ran to her side, as did her neighbor. (Her neighbor is an older gentleman with a very spiritual sort of air about him.) When we got to her dog, she appeared to be dead; she wasn't breathing or moving at all. The neighbor took charge and laid his hands over Mandy, and we knew he was praying or doing some spiritual healing or something. Then all of a sudden, the neighbor sort of jolted, and then Mandy snapped back to life! In an instant she began to breathe again, and then she got up and began to sort of slowly move around. Within a couple of minutes, she was acting like nothing had ever happened. It was just incredible! Do you think this man brought her back to life? If so, is it possible to do this with people? We were speechless, and I got the feeling that we weren't supposed to ask the neighbor what had happened - that we had witnessed some sort of miracle.

When I read your question, my mind instantly went to the movie Michael, starring John Travolta as the Archangel Michael. In that film, Michael brought a dog that had been hit by a truck back to life.

I don't know why you felt you weren't supposed to ask this neighbor what had happened - I bet he would have gladly given you his viewpoint. You absolutely should have asked him! If you are ever in the presence of a miracle again, absolutely and positively ask what just happened.

That is why God/ Universe/ Spirit/ whatever name you prefer gave you a mouth and a way to communicate. You were just so in awe of this apparent miracle that you were caught up in reverence of the situation. Don't ever let that stop you from finding out what happened if there is some way you can.

I wasn't there, I didn't talk to the man, and I don't know what he felt or did. I imagine he did a form of energy healing like Reiki, though most likely, even he doesn't know exactly what he's doing or what to call it.

I also suspect the dog wasn't dead yet - she was just on her way. All of the loving energy from the people around her combined with the healing energy of this man is what brought the dog back.

Remember too that animals have a way of healing themselves from the most horrific accidents, for they don't have human logic and limiting beliefs to interfere with their bodies' natural healing abilities.

I often refer to the Christian Bible and Jesus Christ as an example of how I should try to walk through life. When you asked if humans can be brought back, my mind instantly flashed to the story of Jesus bringing Lazarus back to life, and I thought Yes, of course people can be brought back from the dead!

Please also remember that people will not come back to life if they aren't meant to come back. God will not allow the Universe to fill with Zombies like those in Night of the Living Dead. If it's our time, it's our time, period. Anything else would be completely unnatural and therefore not allowed.

Remember, the Universe operates under a whole bunch of natural laws. I personally don't believe that ANYONE has the ability to reanimate someone who isn't meant to be here.

If you want to learn how to heal, find a reputable Reiki teacher offering classes in your area. Reiki is what I use, and it's VERY effective. It's also easy to learn and to do. (You know that I like THAT aspect of it!)

I wish you lots of healing miracles.

People and animals can be stunned by a blow or other trauma, and they may appear to be dead for a while only to later regain consciousness. Once they're really dead, however, they can't be brought back to life.

Your friend's neighbor was probably praying in his own way when Mandy woke up, and that's what caused him to jolt the way he did. Since her spirit never left her body, she's the same as she was before in terms of her personality.

Once our spirits separate from our bodies (and not by conscious choice, as in meditation or astral travel) we usually stay that way, at least until we get a new body in a new incarnation.

For a long time in the Voodoo tradition, it was thought that Zombies were the spirits of the dead back in their own bodies, but here is what really happens:

A Voodoo priest delivers some paralyzing agent to his victim through food, drink or smoke. (These victims are people the priest believes have wronged him in some major way.)

The victim appears to be dead in that there is no discernible breath, heartbeat or other vital signs. The victim is then buried but not embalmed, and then hours or days later, that person awakens buried alive because they were never really dead to begin with.

The Voodoo priest digs the victim up, and the effects of the trauma and the drugs have done just enough brain damage to render him pretty helpless but still able to follow instructions. As the drug damages the part of the brain that discerns right from wrong, the victim is more willing to do whatever evil deed the Voodoo priest wants done.

In Japan, many people who eat the fugu fish die every year, but most who experience ill effects are stuck in a catatonic state for days or even months and then emerge well again. Not so for the Zombie - the brain and other vital organs are so badly damaged by the drugs that Zombies rarely live for more than five years after their death.

Often oxygen deprivation gets them before they're dug up and they die in the coffin anyway. Most Zombies are used as house servants and cooks, not as murderers - at least, that's what I've HEARD.

I cruised the Caribbean as a dancer on a cruise ship for a while. We docked in Haiti exactly ONCE in 1980, and then found somewhere else to go! Haiti was so wild then that just being there for one day was enough to scare me into not wanting to go back. (This was more due to political instability than Voodoo.)

Of course, I was so fascinated with Voodoo that I jumped at the first invitation experience something. I was shown a Zombie, and he was pretty scary. I don't know whether he died or not, but SOMETHING unlucky had happened to that man!

Going down to the river with hundreds of people all dressed in white was really something. There was only one Zombie in the group, and he kept everyone's glass full. I was careful not to eat or drink anything at that party!