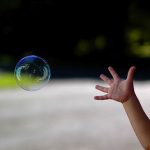 Lately my three-year-old son Isaac has been talking about a little boy he calls Jugger. He says the boy comes to visit him at night when he's sleeping. Isaac says Jugger always wants him to come and play, but Isaac tells him he can't because he's sleeping. Yesterday I was putting Isaac's shoes on him when suddenly he said, I can't, Boy! I asked him who he was talking to, and he said, That boy who just ran outside. He wants me to play with him, but I told him we're going to a different park. It's kind of scary. I'm wondering if this is a spirit guide for Isaac, or just a spirit who likes him. Do you think it's anything to be alarmed about? I don't discourage or alarm Isaac - I simply ask questions about what he's experiencing. I just want to make sure he's safe, and I'm hoping you can ease my worries. Thanks so much! Isaac's date of birth is 2/11/04.

You can rest assured that your son is safe; Jugger is not a threat to him in any way. Isaac can see all kinds of beings from the Otherworld, and Jugger is just a spirit who has befriended him. They like to play together. Jugger is also protective of Isaac, and would probably tell him not do things that could hurt him.

I know first hand how strange it feels to have a child who can see beings that you can't see. I have often written about my son's imaginary friend named Joseph. My son is now sixteen years old, and sometimes he still sees Joseph. Further, he always FEELS his presence.

To get more information from your son, you might try playing games with him. For example, I would hand my son a piece of paper and some crayons and ask him to draw what he saw, and he would draw the same figure over and over. It was a man in a long brown robe-like garment with lots of colors around his head and upper body.

I would also point to myself and then to him and say, I see me and I see you. Who do you see? He would point to me and to him and also to other beings that I couldn't see.

Please be aware that your son can't choose what he sees and what he doesn't see at this time. At some point, he will probably see beings that scare him, but that doesn't mean they are out to harm him in any way. Don't let this confuse you. Not all spiritual beings are pretty ñ in fact, some do look really scary. Sometimes ugly but benevolent beings might scare your boy, and beings that are not from The Light may also come near him to check him out.

When this happens, his guardians will protect him. If he should talk to you about his fears, just remind him that he is very special, that he is always protected, and NOTHING from the Otherworld can physically hurt him.

I used to have this little song I wrote about chasing away the bad guys and how nothing bad could come into in my son's room. I would spin in circles like I was shooting magical protection out of my fingertips. It seemed to work for him. If you're creative, you'll find what works for you and Isaac.

The most important thing you can do for your son is what you have already been doing: You need to treat him like he's a normal child. You need to always believe what he says, no matter how crazy it sounds. He needs to know that throughout his life, he can come to you with whatever he needs to talk about.

Sometimes you are going to be the only person he can confide in, and since he is so incredibly psychically gifted, he is definitely going to need a good confidante. Continue to treat this sort of thing as normal.

I wish you both wonder-full interactions with ALL beings.

It's wonderful that you can allow your son to explore his psychic abilities at this early age. That takes a good deal of courage and faith on a mama's part. Of course, you did this too as a little girl - he gets his ability from you.

I went through the same doubts and worries with my own son, but he grew up to be able to use a knife and fork like everyone else, and can communicate with living people as well as those who have crossed over.

Lots of good things come from being psychically aware, so it's great you're not discouraging him. It's an advantage he'll have all his life if you can keep the faith and an open mind. Being able to see Beyond the Veil is a skill that comes in handy for me every day.

One of the reasons I'm sure your boy is in no danger is because the children who come to him are young like he is. It's difficult for children who die at an early age to accept that they're no longer here with their loving families, so they often latch on to living children who are close to them in age.

It's easy for these spirits to be with him because he treats them like he would anyone else. It makes them happy in the time they have before they move on to Heaven. Your family triggers good feelings and reminds these children of their own loving families.

Since your son is so open to everything, he accepts Jugger to be just as real as the little boy living down the street. He can't tell the difference, and at this point, he doesn't really need to. When I was little, sometimes there were so many young spirits around that I felt like I was in some kind of psychic orphanage.

There is no reason for you to worry about your kiddo, because the Universe protects small fry from bad entities. If we ever do deal with evil entities, it usually happens during adolescence, when our physical bodies are going through so many intense changes.

Evil Doers sometimes hone in on hormonal imbalances, and they can create neuroses and psychoses that plague some people for the rest of their lives. Of course, most of the time, evil doesn't make a dent in our psyches because we are naturally given over to the Good. As we get older, however, all sorts of things can influence us. Most people just block out ALL psychic awareness instead of trying to make sense of it.

I'm so happy that you're encouraging your son to keep in touch with his natural psychic gifts. Perhaps he'll choose to help those little spirits cross over into the Light, and will be able to keep doing so all his life. It can be a burden and an awesome responsibility for a little kid, but he seems to be handling things so far. Of course, it can be a joy, a pleasure and a blessing too.