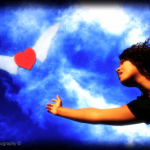 I had a dream two nights ago that I was on my honeymoon with my future husband. (I don't know who he is - I'm single at the moment.) We were on a couch in a hotel lounge area, and there were four men in business suits loitering around us. I was sipping orange juice, and then I went to snuggle my husband. I put my head on his chest and told him I could hear his heart beat, after which he looked at me and smiled. In that moment, I filled up with the nicest, warmest feeling. In my dream, I felt really loved by this person. I felt really comfortable with him and his smile communicated that he loved me too. I touched him to make sure he was real and he felt like he was. The four men faded away, or I didn't notice them anymore. I must have awakened about four times after this dream, and in my half-asleep state, I kept remembering the dream and smiling. When I fully woke up the next morning, I could vividly recall the dream, and it left a warm feeling in the pit of my stomach. Does this dream mean anything? I'm not really insecure about being single, though sometimes I wish the perfect guy for me would show up soon. I couldn't make out the guy in my dream, and he didn't resemble anyone I know. Thank You!

I'm so glad that you're not worried about being single for a while. Though many young people insist on rushing into marriage, it's always better to wait until you have your university years over before you make a commitment for life with someone.

Waiting a few more years before you get married is a VERY good idea, for Aries folks often make quick decisions in love that they later regret.

This doesn't mean that I'm in any way making light of this wonderful dream. It made a big impression on you, so it probably does mean that you're dreaming of your life to come. Fire signs often have prophetic dreams about their romantic futures, especially at your age.

While your dream doesn't give you many details as to the husband you will have, it does show how happy you will be in the future when you choose the correct partner. The fact that the man wasn't anyone you know - or that you couldn't clearly remember his face - doesn't necessarily mean that you don't already know him in real life, or that you haven't known him in another incarnation.

The man in your dream symbolized the kind of person you're hoping to marry. Many times people, places and things in dreams are symbols of other things to come, or represent things you're wishing for.

When we notice numbers in a dream, especially numbers of people, they often represent periods of time. For example, an old time fortune teller might tell you that the four men in your dream represent the four years it will be before you're happily married, which sounds about right to me too.

In the old books, four women in your dream would have meant four months would pass before you are with your intended husband. Numbers we remember can mean many things, but the passage of time is one of the most accepted dream interpretations.

Treasure this dream and the feeling it gives you. You may have it again and again between now and the time you are officially wedded to your beloved. Enjoy it when it comes to you, and enjoy the search for that man who gives you that warm and wonderful feeling. He's waiting for you, and he may be having a similar dream too!

When dreams have a profound effect on us, we can be sure they hold important messages. The dream you've described is no exception, and appears to hold clues as to what you can expect when your life partner comes along one day.

Dreams, instincts and premonitions are often vague, and most do not reveal specifics about things to come, so it's understandable that you could not identify the man in your dream. However, you can trust your feelings in determining its importance to you.

In your dream, you found yourself married to the man of your dreams and already in the midst of your honeymoon, thus your feelings of happiness and security reveal not just the type of relationship you want, but also the type of relationship that is coming your way. Based on how loved you felt in the dream, when this man actually does come into your life, you'll know in an instant that he is the one even if he doesn't physically resemble the man in your dream.

The men in business suits might reflect the profession of your future husband as a business man of sorts. As there were four of them, these men might be symbols of the four cornerstones of a solid foundation, including the comforts of home, security and family, which are attributes metaphysically associated with the number four.

You mentioned that in the dream you were drinking orange juice, which is a fruit symbolic of nourishment and vitality. The color orange represents creativity and the start of a new cycle of life - another positive sign in your dream.

Though you state that you aren't currently concerned about getting married right away, this dream confirms that at some time in your future when you are ready, your true partner will appear, and you'll spend a wonderful life together.

When things do get lonely or you find yourself in an unfulfilling relationship, hold fast to this dream. If you do, it will be that much easier to free yourself from a connection that isn't right for you so you can keep moving forward until the right one appears.

All in all, I would say this was a very profound, premonitory dream. It's a wonderful glimpse of the future and an affirmation of the love that is coming your way.