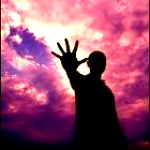 My son just called me and asked me if I believe in ghosts. When I said yes, he told me someone is visiting the apartment he shares with his girlfriend. This spirit is turning on the TV and lamps in another room. They both hear footsteps, and they've both felt someone lean over them while they were sleeping. They also told me that their next door neighbor, Brian, recently died in the hospital. I told them to talk out loud to Brian and tell him he is dead and needs to move on. So far, however, this isn't making a dent in the situation. What do you suggest?

The ghost is attached to the land your son's dwelling was built upon. This ghost is a very friendly, curious woman who lived on that land over 180 years ago. She was a mother and a housewife, and did lots of work around the place, but her main concern was taking care of her family.

The easiest way for beings on the other side to communicate with us is to use energy like electricity. The television and the lamps are both run by electricity, so it's very easy for her to manipulate them.

She wants your son and his girlfriend to know she is there. She wants them to know she is looking out for them and watching over them. That's the reason they saw her leaning over their bed while they were sleeping - she was just making sure everyone was tucked in nice and tight.

Why do you feel it's necessary for your son and his girlfriend to run off this woman who lived there for many, many years before they were even born? Is she bothering them? Is she hurting them in any way?

I feel that having her around the place is actually a good thing. She watches over their things and makes sure that everything is okay. I have heard tell of ghosts closing windows before rain storms and things like that - this is the sort of ghost they're dealing with.

They can tell her to go to the light, but she doesn't have to. She obviously has chosen to stay near this plane. When we die, we are given the choice to cross over or not to cross over. She isn't evil, harmful or bad in any way, she's just a spirit who is choosing to remain earthbound. She will be there long after your son moves out because she CHOOSES to stay on the land that she loved.

I suggest your son and his girl introduce themselves to her out loud. They should explain who they are, what they are doing there, what year it is, etc. Tell them to be sure to express gratitude for the way she is watching out for them, as well as their desire to live in harmony with her.

I personally lived with my ghosts for years and years at my old house. I got used to them being there, and got used to going around behind them, turning off lights and stuff like that.

There is nothing to fear from this woman, for she will never hurt anyone. If anything, she will keep them safe. Just think of the great tales they will have to tell about the ghost woman who lived in their first place.

I wish everyone involved peaceful co-habitation.

It's very common for people who die young or from an unexpected illness to stay earthbound for some time, and often they have annoying little habits that involve electrical appliances.

The spirit wasn't anyone we knew, so there wasn't any polite way to ask it to go away. This person was simply stuck here in between Earth and Heaven. He was passing through, but he didn't want to move on.

I used the St. Michael's Prayer and some incense, and out he went. The batteries are back in the remote, and we're sleeping peacefully through the night.

There are many ways to get rid of a restless spirit. Before your son calls in a professional, here are a couple of things he can try:

Light two white candles, and while lighting them, say out loud, Raphael, Archangel of the Air, begin to blow the winds of change for our dear friend Brian, who will be coming to join You and Your Heavenly Host. Erase his fear and keep him from danger on his journey. Guide him to the Healing Light of Heaven.

The most common way to get rid of unwanted restless spirits is to assemble a Bible, a bell, and one white candle. Inscribe the spirit's full name on the candle and light it. Open the Bible to the 23rd Psalm and read it aloud. Ring the bell and say St. Michael's Prayer:

St. Michael, Archangel, defend us in battle. Be our defense against the wickedness and snares of the Devil, may God rebuke him. We humbly pray, and do thou O Prince of the Heavenly Host, by the Power of God, cast into Hell Satan and all the other evil spirits who prowl about the world seeking the ruin of souls.

Then add, Take with Thee our Brother, Brian, and lead him into the Light of God, Amen. Close the Bible, ring the bell, and blow out the candle. That should take care of things. It's wise to do a ritual cleansing afterwards with sage or some other incense, and make sure the doors are open so Brian's spirit can find its way out of the house.

If none of these things seem to work, then it's time to call in a professional. If they're Catholic, a priest might do a cleansing of their home for free. If they're not, try a priest at a local Episcopal Church. Christians don't like to discuss or perform exorcisms publicly, so this sort of thing is more common than most people realize.