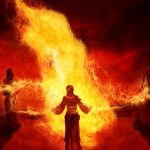 I have heard talk that Obama is the anti-Christ and/or a mere pawn in the New World Order. Do your spirit guides have anything to say about Obama or about groups like the Illuminati or the Freemasons? What are your own thoughts about the idea that the world is secretly being run by a group of spiritually powerful individuals?

There have always been hidden realms of power whose goal is to manipulate and influence us. Groups kike the Illuminati and the Freemasons have existed for centuries and appear to have a common goal.

The Illuminati is believed to be a select group of people who are the power behind a shadow government running our world. Their ultimate goal is to control the worldís governments, finances and military. The Illuminati are credited with deciding who will be elected president, which religions will prosper, and who will have ultimate control. They appear to practice a form of black magick that gives them power to form the New World Order you refer to.

There are many theories about the identity of the anti-christ. Holding President Obamaís actions up against these theories does suggest some resemblance. There are two events to watch for that will confirm that the anti-christ is in power. One is that the antichrist's reign will last three and a half years. The second is that during this phase, world peace will become a reality. If we keep these two concepts in mind, we can watch for them as confirmation of Obamaís true identity.

Even though these groups exist, that doesn't mean we're all doomed. Just as people have moved away from corrupt religious and political entities, we always have the freedom and the responsibility to seek higher ground. The more we can educate ourselves about these groups, the greater chance we will have of counteracting their activities. The more we work to strengthen our own spiritual resources, the less power they can wield over us as individuals.

We can't fight these clandestine groups on the physical plane, for they already appear to own the government and legal system. Our best defense is to counteract the negative energy they create by increasing our own spiritual wisdom and resources. Meditation is essential. We should also pray to promote global healing, enlightenment and spiritual protection. We must share our knowledge with others as we learn more about these groups, for awareness is the first step toward change. Spirit can direct us on how to respond, challenge or avoid being pulled into the designs of these dark forces.

Those of us who live a spiritual life know that what happens in the physical world has little impact on us as long as we stay strongly connected to the Divine. As these entities thrive, we must keep in mind that we are always protected by a force much stronger than any group that attempts to practice black magick for their own gain.

Many intelligent, educated people carry a deep mistrust of change. This is what gave birth to and continues to feed the strange paranoia behind conspiracy theories. The internet and other mass media are wonderful things, but in the hands of paranoid people, they can become powerful tools of misinformation.

Those who spread conspiracy theories about how evil forces are trying to take over the world are under the delusion that they are the savvy few who have figured out the truth, and the rest of the world is under the spell of power-hungry manipulators. However, from the higher spiritual perspective I'm being shown, it's the people who live in fear and promote conspiracy theories who are under a dark spell.

You're probably wondering where these ideas came from if they're unfounded. I believe two fear-driven groups can be pinpointed: the extreme political right, which is profoundly distrustful of government in general, and the extreme religious right, which sees Satan's hand in everyone and everything outside its own church doors.

There have always been people who run around yelling that the sky is falling, but with the explosion of the internet, these theories have seeped into mainstream culture. If we're going to worry about anyone, I think we should worry about conspiracy theorists, for people who are terrified are capable of doing all sorts of crazy things in the name of defending themselves from imaginary threats.

I am NOT suggesting that all politicians are good-hearted, selfless public servants, or that the government has never done anything evil. People do selfish things all the time in order to get what they want or keep themselves out of trouble, and this includes people in political power.

However, from the perspective I'm being shown, most politicians have far more light, character and sanity about them than people who promote conspiracy theories, who are shown to me as surrounded by darkness, steeped in fear, and out of touch with physical reality. (They'll probably call me a servant of the devil or an Illuminati agent and claim I wrote this article in order to lull all of you into a false sense of security!)

It's easy to understand why these groups and other pessimists would feel uneasy: they're afraid of change, and change is inevitable. We actually are moving toward a global government, and people are rejecting conservative religious traditions in favor of personal spiritual journeys. Instead of being something to fear, however, I think these changes will on the whole prove positive for humankind.