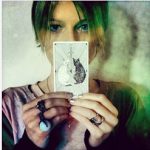 The Tarot is an extremely versatile divination tool. A single card in and of itself can be interpreted in many different ways. Because the illustrations and themes of each Tarot deck vary, readers can extract many different messages from them.

Keep in mind that reading the Tarot is subject to not only the deck one uses but an individual's unique psychic abilities as well. Though each card has a basic meaning, additional interpretations will begin to develop as students advance their skills and knowledge.

The Sacred Rose and Ryder-Waite decks are both traditional forms of the Tarot consisting of 78 images that outline the journey to self-actualization and spiritual attainment. There are other decks that vary in images and interpretations, but for the two decks you mentioned, the symbolic illustrations on each card convey the same basic message.

Keep in mind that the meaning of a card will change based on the question being asked as well as the other cards shown around it. For example, if you are asking about a love relationship and the Lovers, the Two of Rods, the Three of Rods and the Hierophant appear, they could be interpreted as a promising union (The Lovers), with a possible proposal (Two of Rods), and advise that the querant wait for things to develop (Three of Rods) in a traditional manner (The Hierophant).

However, in a health reading, these same cards would take on a different meaning. The Lovers would then indicate overall balance in the body, while the Two of Rods would suggest that the querant is seeking an answer to a specific problem. The combination of the Three of Rods and the Hierophant suggest that they need to seek advice from an expert such as a medical doctor or holistic practitioner.

So as you can see, not only do illustrations vary from deck to deck, but the same cards in the same deck can take on different meanings depending on the question asked. This makes Tarot one of the most powerful divination tools available. Most of the many Tarot decks on the market offer similar versions of traditional images. Because of this, you can choose a deck you are intuitively drawn to based on its illustrations and themes and still receive a consistent, reliable reading.

If you would like to learn more about Tarot and how to extract more in-depth answers and direction from the cards, I encourage you to sign up for my beginnerís or advanced Tarot classes, which are available in the products section of my profile at Kajama.

Of course, over the centuries, the cards have taken on certain general meanings as the practice of divination was handed down to generations of students and explained in various books. Further, the cards depict some powerful symbols with universal meanings. For example, one has only to look at The Tower card to guess that it suggests ill fortune.

Since you're using the cards to create a language of symbols through which to communicate with your own higher self, subconscious mind, and/or metaphysical guides, the important thing is that this language work for you.

This is true of all symbolic psychic work. For example, to you seeing a cross may represent a cross-roads, while to someone else, it may signify religion and to yet another person, suffering. As the source of your psychic information will know that a cross represents a crossroads to you, when you are receiving psychic impressions clairvoyantly, you will be shown a cross when crossroads is being communicated, and something else to represent suffering and religion.

The same is true when working with tarot. When certain information is indicated, whatever card you associate with that information will come up for you.

There are two main approaches to reading tarot. One is to study the classical interpretations. This can take many years since each card has a slightly different nuance depending on the subject at hand, and can mean different things when in different positions in a spread. The second approach is intuitive: one ponders the pictures on the cards and allows the images depicted to suggest answers.

Long-time students of tarot quickly develop their own language, which is usually a combination of learned interpretations and those they have attributed to the cards.

Some decks vary slightly on the classic Ryder-Waite while others differ dramatically in terms of themes and images. The more different a deck is from the one you first learned on, the harder it will be to switch decks unless you are employing an entirely spontaneous, intuitive approach. For this reason, it's wise to spend a good amount of time developing a relationship with a new deck before using it to read for others.