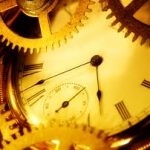 Please help! My daughter was born four weeks early, and the clock in our house stopped at the exact time she was born: 7:34 p.m. on February 25, 2006. However, the pendulum continued to swing for months afterwards even though the time never moved. (There is only one battery that ran both the time and pendulum.) When we moved in June 2009, I put the clock in a room downstairs. I have been afraid to change the battery for fear of ruining something. I was told that I should fix the clock or the stuck energy would hold her back from something in her life. What do I do? And what does this mean? I was also told that the clock stopped because she did not want to enter this world and had changed her mind but it was too late. Is this true? I am so confused because she is a miracle baby and is very smart and healthy.

You don't need to worry about the clock stopping or having it fixed. Most likely, the clock was stopped by a guardian angel or loved one from the other side in order to mark the exact time of this important birth, in which case this not about your daughter but about the event.

Clocks that stop, computers that dim, and electronics that act up are typical signs of spiritual activity. The Spirit who caused this was trying to make its presence known, and this was the best way it could find to celebrate the birth of your daughter. If you think of a loved one who recently crossed over, perhaps a grandparent or other relative, you may find your culprit.

The idea that the clock being stuck could keep your baby from moving forward is nothing to concern yourself with. Notice that the part of the clock that keeps time is the only thing that stopped. We might view the pendulum, which continued to move, as representing life, breath and heartbeat.

Once you determine who it was that stopped the clock to mark her birth, you can decide whether or not you want to keep the clock as it is so you can treasure it as a sign from a loved one on the other side, or put a new battery in it to restore the clock to working order. Either way, this won't have any effect on your daughter. In fact, I think this whole experience serves as an indication that your daughter has a very special guardian angel watching over her from the spirit world, so it's a very positive sign.

The idea that your daughter changed her mind and did not want to be born is contradicted by the fact that she came four weeks early. That in itself proves that she was anxious to come into the world and could not wait another minute. You do not mention her date of birth or if her early arrival changed her astrological sign. This may be another factor to consider when pondering the meaning of her early arrival.

The soul is very particular about the time and manner in which it comes into the world. I have a nephew whose sign changed from the expected Libra to Virgo when he was born four weeks early. Since he has all the qualities of a Virgo, I like to think he knew exactly when it was time for him to be born. My own son, on the other hand, arrived six weeks late, thus changing his sign from Pisces to Taurus, and he carries many Taurus traits that have served him well on his journey through life.

When I focus on your daughter, I see her as healthy, happy and magical, with no signs of trouble around her, so please do not worry about the clock or the fact that she came four weeks early.

The first possible explanation doesn't see special meaning in this event, for it attributes it to natural forces. One theory for why watches sometimes stop when someone dies is rooted in how our own energy can affect the energy of the things around us. There are some people who can never wear watches because their own energy is so strong it makes electrical things around them go haywire.

When electrical appliances go crazy at moments of emotional intensity, it may be because the strong energy of a person essentially caused the device to blow a fuse. If this was the case in your situation, it could be that your own energy at the intense moment of giving birth caused your clock to stop. It could also be that the energy of someone else in the family was so charged with the momentous event of your daughter's birth that it caused this to happen.

I'm not partial to this explanation myself, but if this clock is something you treasure, you were very anxious about the premature timing of your daughter's birth, and you had an intense delivery experience, it could explain this strange phenomenon.

The other possible explanation does attribute special meaning to this event. In this scenario, a conscious metaphysical being caused the clock to stop at that exact moment in order to send you a sign. That metaphysical being could be the soul of your daughter, but it could also be a departed relative who wanted to let you know they were there for this momentous occasion, or even a spirit guide telling you that this child was destined to be born to you for you have a very special spiritual bond.

Of these options, I would bet on a departed relative causing this striking sign, for it is very common for departed family members to gather around on special family occasions such as holidays, reunions, weddings, funerals, deaths and births. It is also common for them to try to reach out and let you know that they are there.

You say that your daughter is smart and healthy. As a wise woman I once knew often said, Don't borrow trouble. Since there are no real problems here, it's foolish to assume the worst. Further, if this is a sign related to your daughter's destiny, that destiny will prove stronger than anything that is done to this clock, so you should feel free to fix it if you'd like to have it working again.