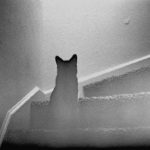 Even though I love nature and all animals, I've always had a very special sense of connection to cats. When I see one, I just have to stop and pet it. If I meow to it, it usually meows back to me, and sometimes follows me, purring and wanting to be petted. When I can, I will usually pick it up and hold it for a while. If a friend insults cats, I come to their defense as if they were my best friends, and I can't help but feel angry if they are misjudged. If I see a hurt or abandoned stray, my heartstrings tug at me, and if there's no way for me to help, I will say a prayer and ask the Universe to guide the cat. Even though I don't have a cat at home now because none of my other family members want one in the house, I know in the future I must have three or four cats to keep me company. I'm not sure why I have such an affinity to cats, and I'm curious to know the underlying reasons. Could this be related to a past life, to my spirituality, or to a life lesson I need to learn? I hope I don't sound too crazy! I was born on October 4, 1982, at 7:53 p.m. in New York City. Thank you so much for your time!

You don't sound the least bit crazy to me, but then, I am the "animal woman" who talks to every living creature that crosses my path, so maybe we both seem crazy to the outside world.

You have a number of things going on here. The first is that you have had cats as helpers in many other lives prior to this one. You were what some may call a "witch" in one life, and you had quite a few cats with you then.

I'm sure you're familiar with the idea that cats are spirits or "familiars" that accompany witches. Some even believe that witches can assume the form of cats.

In reality, cats have always been attracted to people with special "gifts." Cats soak up the negative energy around those people then go off somewhere and sleep off that energy. They are psychic protectors.

The second thing is that you had at least one life in ancient Egypt, when cats were considered very important "God-like" creatures. The law protected cats at this time, and anyone who harmed or killed a cat faced dire consequences.

Diodorus Siculus said, "Whoever kills a cat in Egypt is condemned to death, whether he committed this crime deliberately or not." When someone broke this law, the people would gather around him and kill him. The goddess Bast was often depicted as a cat, or sometimes she would just have a cat's head.

In this life, the Cat is your main animal spirit guide. You do not have to have an actual living cat around you to be able to pick up on this special energy. I think that is why you are compelled to defend cats so staunchly when someone is insulting them.

The cat is here to teach you things like love, independence, how to see the unseen, and how to fight when cornered. The cat will help you with meditation as well, so if you want to start, now would be a good time.

She will also come into your dreams and assist you there. I am quite sure that you have a lot of dreams that somehow involve cats.

I think it would be great for you to find a way to spend more time around cats. If the people you live with don't want one, then you could always volunteer at your local humane society, or find some other way to spend a lot of time with living cats.

Then study their movements and listen to them "speak" to each other, for this will really help you learn the spiritual lessons that cats have to teach you. We can learn from animals so easily, for their traits are simple and obvious, and easy for us to adopt ourselves.

That is one reason why humans and animals co-exist here. In this lifetime, a lot of animals (not just cats) will be wonderful teachers for you.

I wish you wonderful cat encounters, both in this world and beyond.

I know that you adore ALL animals, for you Libras are well known for the love, compassion, and strong connection you have with other species. Many veterinarians are Libras - in fact, about a third of all the vets in the United States were born under that sign. That is one reason you are such an animal lover.

You very cleverly included your exact birth date with your question, and I found your chart FASCINATING! At first I didn't understand your cat connection because of the lack of balance in where your planets fall in your chart, but after studying the graph, or the "Sky Map" of your birth date, time and place, it was revealed to me why you have this uncanny connection.

Numerous aspects in your astrology chart point to communication with the animal kingdom. Part of this is due to the disappointments you have endured from other PEOPLE, but most of it arises from the nature of your own inner spirit.

You can FEEL what those little "furry snakes" feel in your own Heart. (Thatís what the Egyptians called cats because of how they weave in and out of our feet.) While most people communicate with kitties from the outside in, you connect with them from the inside out.

To discover your bliss, you really should consider working as an animal communicator with an emphasis on felines. I think if you did that, you would find that there is no cat too big or too small to speak directly to your spirit.

Lions and tigers and kittens (oh my!) could benefit from the work you would be able to do in terms of bringing them closer to their human "mothers" and "fathers." Now that the world is more accepting of the notion of animal communication, you could actually develop a well-paying career in this field.

You say that you know you'll have three or four cats later on in your life. Believe me, there will be a LOT more than three or four! I see you operating your very own "no kill" shelter, and placing over a thousand cats in terrific homes over the course of your lifetime.

The first step in this journey is for you to go back to school (sorry, Libra, it's your karma) to be come a Veterinary Technician. (Don't worry, that doesn't mean that you'll have to put anyone to sleep!)

When you're done with that, the perfect vet will come into your life, and you'll be off on an exciting and rewarding new career. Money to get that going will just fall into your lap, because your Guides and Angels (one is a Tiger, have you seen him?) will help you find it.

Your career will benefit two-legged and four-legged critters alike. Start researching this idea TODAY, and get started on your Life Path, for you'll enjoy many rewards by answering your calling.