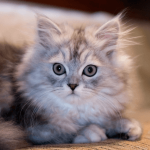 I grew up with cats, so I'm familiar with their behavior in general. For the past three years or so, I've had a cat that is unlike any other cat I've ever met. She meows constantly, seems very restless, and does other strange things like she's trying to communicate with me. For example, it's like she will do tricks for me to try to get my attention. She'll roll over on her back, stare back up at me, and when I look at her, she'll flip over, stand up and start meowing earnestly again. Recently a friend met her for the first time, saw all of this, and announced, That cat was definitely human in a past life! Do you think that's possible? Can we be reborn as animals? If so, is my cat a tortured human who is trapped in a cat's body and trying desperately to tell someone who she really is? I love your column!

Many people assume that humans can become animals, but it just doesn't happen. Humans have never and will never incarnate into the body of an animal. Animals evolve and become humans, but the reverse is never true.

Just because your cat can communicate this way doesn't mean she was human - it just means she is very smart! She is a thinking, living being and has learned how to get you to pay attention. I can understand why your friend would make a comment like that about your cat, because she does seem to be so much more interactive than most cats.

Your pet is what witches of old called a familiar. A familiar is a spirit in the form of a cat. Your cat is your living animal totem. She's there to help you with big decisions, emotional dilemmas, and sticky situations. She's also there to bring you joy and make you laugh.

When you're feeling bad, she will come over to you, lay near you, suck up your negativity and go lay down somewhere and sleep it off. That is what she and many other cats do for their life's work. She is a fabulous friend and a very helpful teacher.

You need to learn to listen to her. I have found the best way to hear an animal is to put at least one of my hands on the animal's back or side to let the animal know, I am here. Get quiet and I will listen. Then I usually close my eyes or look into the animal's eyes (most cats do not like this), and just listen to the thoughts that enter my head.

That is how all guides speak to us - they use our own thoughts to communicate what we need to hear. When she starts acting up to get your attention, she has something she really wants or needs to say.

Cats and dogs are obviously the most available animal totems people might have as pets. They are so common that they are often overlooked as the great teachers they are. Cats teach us about things like independence, how to bounce back after hardships, unpredictability, curiosity, healing, cleverness, love, and the ability to fight when cornered.

They also show us how to meditate. I don't know about you, but if I'm lying down and one of my cats comes and lies down beside me, that purring puts me into a very deep trance.

Your cat is a special being sent to you by Spirit for you to have as a helper, teacher, guide and friend. Pay attention to her - she is very wise.

I wish you and your cat purr-fectly happy and fulfilling lives!

I have several cats who exhibit this exact same behavior!

Your kitty is not a human trapped in a cat's body. Of that I'm sure, as animals don't incarnate as human beings. I've never known a human who was an animal before, or an animal who was a human before. In my opinion, it's impossible.

When we were little, our parents might have said, Be careful or you'll come back as a WORM! but it doesn't happen that way. Humans are humans, and cats are cats.

Of course, since my opinion is just my opinion, I took your question to some experts. I discussed the matter with Mars, my big orange Tabby, and he says he would NEVER reincarnate as a human with only one life, and that no other self-respecting feline would either.

Little Schmetz, our baby black kitty, says that he's looking forward to experiencing all nine of his lives. (I hate to inform him that because he was an impound cat, a couple of those have already been spent!)

Trixie, the most human-acting of the bunch, says With nine lives of my own, what good would one human incarnation do me? I agree. It doesn't seem like a very good trade to be human and not a cat in my house!

To them, it's better to be a cat instead of a silly human. I'm reminded of a sign I saw at my vet's one time: Dogs have masters. Cats have staff!

We have a different thought process than our animal friends. We have moral judgement and free will. Those two things are uniquely human - our darling pets don't possess those qualities.

We may personify their actions, and they may seem human, but that just comes from paying attention to the kinds of things that please us, that get our attention or the response they're looking for.

They want us to be happy, and they want food and a nice place to stay. Beyond that, they're cats. They'll hunt and stalk and eat and sleep and sleep and sleep. I believe they love us, but there are people who would argue even THAT point with you.

Highly evolved animals can seem very human, and they can love us and share our love with others. As human as they may seem, however, they're only our animal companions and pets.

That doesn't mean, however, that they can't communicate with us! Mine talk to me. In my dreams, they even speak to me in words sometimes. The ones who have crossed over visit me in dreams too, and they assure me they're waiting for me on the other side.