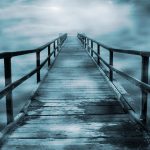 About three months ago, I bought a Columbia jacket on eBay. The jacket was so nice and so cheap that I was worried it was stolen merchandise, so I e-mailed the seller directly. She told me that it was her daughter's favorite jacket but she had died in a car accident while wearing it! I was in shock and wanted to cancel my purchase, but she'd already sent it so all I could do was wait. Here is where the weird stuff starts. First I noticed her daughter's name was written on the name tag, the tags on the inside, and on the inside of each sleeve. The daughter also kissed the inside of each sleeve with lip gloss! The coat is also lightly stained from normal wear. I e-mailed the mother again and she said her daughter was very protective of her jacket and she wanted to make sure everyone knew it was hers. A couple of days later, I noticed a sweet yet pungent smell coming from the jacket. I looked at it and noticed that the stains from normal wear had somehow gotten worse from just being in my closet. I suspected mold or mildew but this didn't seem to be the case. I decided to wash it. I followed the washing instructions and then put the coat in the dryer. Afterward, the stains and scent had gotten worse! To make a long story short, I decided to try keeping the jacket and wearing it. The stains seem to come and go, as does the pungent smell. I'm not the only one who notices it, either; when it kicks up, people ask me what that smell is. What usually happened was the smell or stains would get bad so I'd take the jacket off, then they'd disappear so I'd wear it again, and then they'd come back again. I got tired of this so I put the jacket away in my closet, and that's where it's been for the last month. As long as I don't touch it, there are no stains on it and almost no scent. What do you think this is? Is it possible that the girl who owned it is trying to hold onto it from the grave? Thanks!

Over the years, I've learned that something has to be done with the treasured belongings of the dead so their spirits no longer feel attached to the Earth plane.

Often loved ones have no idea what to do with those treasured possessions. Most precious things go to the people they were intended to go to, but there are some items that don't seem valuable that spirits may be strongly attached to. Garments are often connected to spirits because the family usually holds on to departed loved ones' clothing - these are often the last objects disposed of.

The girl whose jacket you're wearing (when you can wear it!) hasn't completely moved on. No matter what you do, those vibrations are going to stay in that jacket unless she accepts that she's not here on the Earth plane anymore and can't wear it. She will continue to come in and out until she moves on.

She's not strong enough to manifest as a spirit, so you're stuck with these feelings and smells. The main problem now is that she seems to be manifesting through that jacket, and therefore through YOU! Your own attachment to that jacket is becoming more like hers was. Be aware of this, and don't take any chances with your own Harmony.

There is a rare but possible danger that when she died, she was being bothered in some way by negative energies. People who use alcohol, drugs, or take extreme risks in their lives are often accompanied by negative forces.

You can't afford to adopt those energies along with that jacket. If you've already tried the old remedies such as sprinkling Holy Water on it under the full moon every month for six months, bathing it in the noon sun for an hour on the 21st of three sequential months, or smudging it with burning sage for an hour, it's time to get rid of the thing.

Because this jacket could be the very last thing holding that poor girl to the Earth plane, it needs to be destroyed. Since she can't move on by herself, it's up to you to help her. You didn't ask to, but because you have her favorite article of clothing, it's your job to do it now.

If she was cremated, the jacket should be burned as soon as possible. If she was buried, you can either bury the jacket (away from your home, please!) or place it in moving water like the ocean or a river.

The pinch you feel from releasing your own attachment to the jacket is nothing like what could happen if you hang on to the thing for a few more years, so get rid of it right away.

I support your theory that this girl doesn't want anyone else wearing her jacket. In fact, I wouldn't be surprised if the mother is being haunted by this girl for selling it.

Ghost stains and odors are not that unusual. Spirits often convey their presence via smells, most commonly emitting odors that were associated with them when they were living. People who have passed over often manifest odors to their loved ones such as cigar or cigarette smoke if they smoked, a favorite perfume, or the aroma of a certain food that can be directly associated with them. These events aren't necessarily negative; the spirits simply want people to know they are still around.

After my ex-husband passed, I would often encounter the smell of Juicy Fruit gum whenever I got in my car. This was his favorite gum and he always had a pack in his pocket. The odor was stronger than usual and impossible to miss. As soon as someone else would get in the car with me, however, the smell would disappear almost instantly.

I'm curious to know if the daughter was wearing this jacket when she passed, as the stains and odor you describe don't seem to be associated with a familiar or pleasant smell. In fact, it sounds as if they are deliberately designed to ward off anyone from wearing the jacket. Consequently, these phenomena will continue if anyone else tries to wear the jacket.

Ghost stains are also known to appear and disappear at random, or they may be triggered when one encounters an accident scene or location in a home where someone has died. Some people have even seen blood stains that seem to come from nowhere and disappear just as quickly.

Chances are that the mother who sold the jacket also encountered the same stains and smells you did, but isn't willing to admit it; this could account for the inexpensive price you paid.

I doubt you'll be able to get your money back, but it would be wonderful if this jacket could somehow be returned to the daughter. If she was buried, the coat should be placed on her grave; if she was cremated, the ideal way to bring her peace might be to burn the coat in a ceremonial way to send its essence to the other side.

I sense that the girl's mother wouldn't be willing to do such a thing, and if you returned it to her, she might even re-list it on eBay. Perhaps this jacket found its way to you so that it could be properly dealt with in a way that would bring some peace to the young girl it once belonged to.