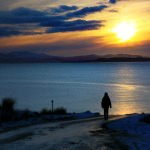 I have a rich dream life and usually have an out of body experience a couple of times each week. The other morning, I was in the familiar state just prior to leaving my body when I felt something like an astral hand caressing my leg. Since it felt amazingly good, I let it keep going. It caressed higher and higher until it was at my groin. Though it still felt great, I decided I had better find out who it was. I reached my astral hand down and grabbed it by the wrist. As I did this, I popped out of my body and found myself holding this disembodied hand. It was green and looked like the hand of an alien, which totally shocked me. It was like the rest of its body was invisible or in another dimension, like it had reached only its hand through to this world. It wanted me to release it but I wouldn't. I took off in the astral to find someone who could tell me what this being might be, but before I could find someone, I wound up back in my body, which broke my hold on its wrist. I am hoping you can tell me what happened and if this is something I should be concerned about. Thanks!

Thank you for sharing your experience. While I'm sure it was very strange for you, it seem you maintained control over the situation at all times, which is one of the most important skills to master in astral projection. Many people can't control where or when they astral project or whom they encounter while out of the body. Your reactions are evidence of your considerable knowledge and experience in this arena.

Often when people have encounters like this, they are overcome with panic and a need to free themselves from the situation. If they are new to this practice, they will probably let fear take over. This gives astral entities power over them. The fact that you were able to take and keep hold of the hand and then seek out someone to tell you what it might be also speaks to your ability to manage your projections. By remaining brave and confident, you were able to maintain control.

Some believe that aliens can dislodge or release parts of their bodies and then rapidly regrow new ones. I don't think the hand was reaching through to you from another dimension; more likely, when this entity found himself caught by you and could not free himself, he simply detached the limb to make his getaway. If this was indeed an alien, he will probably not return, as aliens are extremely leery of being discovered or trapped in any manner. Whether this was an alien or a spirit, it's not likely to bother you again now that it knows you are not passive or easily frightened.

If you feel threatened by what happened or have this experience again, I recommend practicing a protection ritual before you go out on your weekly astral journeys. Burning sage incense before bed and keeping a bowl or jar of salt near your bedside can help keep negative energies away. You may also want to sleep with a protective stone such as turquoise or malachite around your neck.

As you continue to build your skills in this area, you may encounter a variety of spirits or other beings, which in your case should prove quite interesting. Based on the fact that you are fearless, they won't be able to control you. Because of this, you should feel free to explore other dimensions without being harmed.

You may also want to keep a journal of your astral journeys so you can see how much you evolve over time, and determine any changes you want to make or particular experiences you'd like to set in motion.

You are so bold and brave! I'm sure it's your fearlessness that has empowered you to have these fascinating experiences. Please don't let this encounter shake you; it was strange but if you think about it, everything worked out fine in the end.

I have had experiences similar to what you describe in terms of having orgasmic feelings while in the mind awake/body asleep state. I have also felt beings touching me when in this state, and heard many stories of a similar nature from other people. I have even heard of people encountering a green being like the one you describe, so this may be a type of astral wildlife.

For some reason, being in the mind awake/body asleep state seems to attract astral entities. Of course, it could be that they also try to feed on our energy when we're unconscious, and that we're only aware of this happening when we're vibrationally in harmony with the astral but conscious. If it's true that being in this state of mind attracts these entities, it may be because their goal is to ellicit strong emotions in us so they can feed off that energy. (This would be hard to do when we're unconscious.)

While the tactic of many lower astrals is to incite fear, some focus on arousing feelings of lust. The whole point is to get us emotionally worked up, for this creates lots of energy for them to feed on. As for whether this is something you should be concerned about, I don't think the entity you grabbed was any more threatening than someone who might grope you in a single's bar. Most of the time, all you need to send creepy creatures packing is a strong rebuff.

I don't think you need to be concerned, for it certainly sounds like you know how to handle yourself! I love imagining this entity's surprise when you grabbed it and wouldn't let go. The way to handle this sort of situation is to do just what you did: if you're prepared to boldly take charge, you should be able to handle anyone you encounter whether you're traveling in or out of your body.

You may be interested in noting that it is our own essence that determines what we attract. People who are anxious or fearful tend to attract frightening entities, while people who are sexually frustrated and have an excess of sexual energy tend to attract the sort of experience you describe. It therefore follows that one way to prevent such experiences in the future is to cultivate a fulfilling sex life.