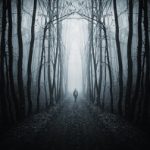 I had a dream that has changed my life. In the dream, it was springtime and I was outside walking about in a meadow. It was very peaceful and I could feel the breeze in my hair. Next I was with the late Pope John Paul II and a priest who was the pope's aide and a good friend of mine in the dream. I was wearing a white dress that looked like a first communion dress. Someone caught my attention. I alerted the pope and he told me to let the Dalai Lama in. I opened the large iron gate and escorted him to a small chapel. When I excused myself to let them speak, the pope said to me: Sit down, this message is for you. I sat in a rocking chair. As I was leaning forward attentively to hear what he had to say, the landscape morphed into winter. I was now in a cathedral listening to mass, wearing a winter coat and holding a book in my hand. I saw the priest and I told him I was so glad to see him because I wanted his advice and to share with him a major life decision I had made. (The decision was that I had agreed to marry my elementary school love.) However, before I could share the news, he interrupted me and said, Oh, I know what decision you have made, but you have to consider X. (Here he stated the full name of a person known to me.) I stopped and looked at him and said: X? Then all of a sudden I was flooded with memories of times I had been with this person. The priest answered, Yes, he cares a great deal for you. He told me. So I asked the priest what he had said, but the priest just insisted that I have to consider this person. He then asked me to walk with him so he could tell me more of what this person had said. As he was going to tell me, I fell in a mound of snow and couldn't get out. I then saw the priest cross the street and disappear into the night. I've continued to have more vivid dreams of the man I was told to consider. What do you think this all means?

I believe this was more a vision than a dream. In fact, based on the spiritual leaders who were present, your keen awareness of the different seasons, and all the other details you relayed, I think you should consider this a spiritual intervention of sorts.

If we begin by considering the seasons and how they appear to play an important part in this vision, we can see why this message could be life-changing. The dream begins in spring, a time of year when physical rebirth and new life are generated. At this point, the dream is about the future and the wonderful things to come.

When the scene of the dream turns to winter, the mood definitely shifts. Winter is a time of waiting or hibernation when one sits still to ponder spiritual matters more than physical concerns. The winter coat you wear represents a type of protection. The mound that you fell into represents a baptism of sorts, with the snow and the color white representing a spiritual rebirth.

Our dreams and visions tend to deliver messages in a form that is familiar to us. Because you have a Catholic background, yours included the pope and a priest. When the Dalai Lama entered the picture, you had a trinity of religious leaders working with you. Since you trust the spiritual wisdom of these men, you're being encouraged to trust the message of the dream.

Dreams and visions have a way of shifting our awareness and presenting new ideas for us to consider. This certainly appears to be the case with this remarkable dream. You believed you had already made a life-changing decision, but then your subconscious suggested a different and perhaps better alternative. Note that the minute it was suggested that you consider X, you became open to the idea.

You didn't mention what kind of contact you currently have with either of these men. However, based on the fact that you continue to have dreams about this other person, I think you'd be wise to explore this possibility in real life. If you are not 100% committed to marrying your elementary school sweetheart, you may want to take a break from that relationship or at least postpone the wedding regardless of what is happening with X.

If it turns out that neither you nor X are interested in pursuing a relationship, the vision you had could still keep you from moving into a commitment you're not wholly sure about, and open up to new and potentially more rewarding possibilities.

This profound dream illustrates your ambivalence about transitioning into a new chapter of life. You feel torn between the old and new, the familiar and unknown. This is perfectly natural during periods of growth and change; as excitement pushes us forward while fear pulls us back, we rarely experience perfectly smooth sailing.

You are poised between seasons. Winter symbolizes dormancy, pregnancy or preparation. It is a period of rest and renewal before new life emerges. Spring is about birth and expansion as we enter a fresh cycle of life. As the dream begins, you feel comfortable in your springtime energy. Your white dress represents a clean slate and new beginning. It is a first communion dress because youíre prepared for communication/ union with your spiritual side.

Here you're portrayed as a spiritual novice surrounded by three wise teachers. As both East and West are represented, their wisdom is well-rounded. In fact, the pope outright instructs you to let the Dalai Lama in (to your psyche). Since you have to open an iron gate to get to the Dalai Lama, his Buddhist views may be challenging for you to integrate.

You sit in a rocking chair, which is symbolic of vacillation and uncertainty. Just as you are about to receive the popeís message, you become fearful and the dream retreats back to winter, your dark and cozy safety zone. You thus close yourself off from hearing the popeís guidance on what lies ahead.

You feel vulnerable at the thought of new growth, so you insulate yourself with a warm winter coat and downsize from meeting with the pope to a local priest in order to feel more comfortable. You are about to share news about your childhood sweetheart (symbolic of looking back) when the priest interrupts and asks you to consider another option.

You want to know more but fall into a snowdrift and get stuck. Earlier in the dream, you don't hear the pope because the scene morphs into winter. This means when a spiritual message is about to be revealed, you run back to your cave to hibernate instead of emerging into the sunlight to receive guidance about your future.

You are on the verge of spiritual growth and learning to trust in the wisdom of your higher self. Imagine releasing what is familiar and embracing the unknown. If you reach out to the person the priest mentioned and see where it leads, a lesson, friendship or more will surely blossom.