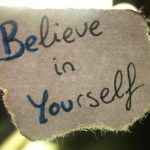 “I accept myself for who I am and what I believe. It is not my responsibility for you to accept me. That is your problem.”

It has taken a very long time but I believe I am now doing what I was meant to. However, initially, not everybody was as accepting about the path I have chosen as I had thought. All to do with a family member’s religious belief as opposed to my belief in spirituality. However, in the end, we agreed to disagree with one another and left it at that with no difference in the feelings we have for each other. I would never consider criticizing anyone’s religious beliefs or customs and would hope and expect the same courtesy be extended to mine.