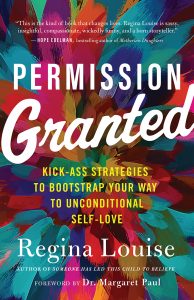 Bringing Your Own Permission

An Excerpt from Permission Granted by Regina Louise

Recently, while in quarantine, and on a day when I can admit I was close to being bored in the house, I decided to circle back around and give the show The Good Fight some attention. I dug Christine Baranski in The Good Wife and thought, Why not? And between you and me, I still had it bad for Chris Noth from when he played the role of Mr. Big in Sex and the City. Shut up, right? I know, I know. I know he was not always so gentlemanly with our girl Carrie Bradshaw, but damn, those eyes, that height, the size of those hands. I digress. Back to my new favorite series. Okay, so I immediately fell in love with all the kick-ass chicks on The Good Fight. Tell me, who names their daughter Cush Jumbo without expecting her to stop the world in its tracks? Cush’s mama or whoever named her had no qualms about expressing their originality and setting her up to either go big or go home whenever she heard her named called. I’m just saying. Whether or not they intended to, they gave that child something to courageously grow into. And when Cush’s character, Lucca Quinn, walks into the room, the molecules change, baby. Without her saying a word, you already know that she is here for it, kicking that ass and taking their names. Talk about bringing permission to be who you are, everywhere you go. Talk about inspiring. Talk to the hand, all you common-names folks, ’cause Cush Jumbo is in the house! Granting yourself permission by bringing your own permission is powerful and courageous, allowing you to hack uncertainty by inviting what’s unknown to become known. And if you didn’t know before, now you know that I love the power of originality in names. Okay, let’s move on.

BYOP
I’d like you to consider how not only to be your own permission but also to bring it. As that old-school saying by the Buffalo Soldiers goes, “You have to bring ass to get some ass.” To win anything, you must be willing to fight for it. Therefore, you have to bring your own permission in order to get permission to get the job of being you done! Here’s another way to consider this strategy. You know how when you’re invited to a party, a cookout, a tailgating shindig, and the invite reads “BYOB,” as in bring your own beer, bottle, bae, booty, and whatever else begins with B that you’d want to tote to the party in order to have that turnt-up time you were hoping to have? Well, here, I invite you to BYOP, and yes, you guessed it, as in Bring Your Own Permission everywhere you go. Remember that fly old-school slogan from American Express Travelers Checks back in the day? There he was, Karl Malden, all earnest sounding with that voice of his commanding us: “Don’t leave home without it.” This strategy invites you to establish your relationship with and to grow your definition of bringing your own:

Can you imagine the impact of taking all of you everywhere you go? Bringing your own permission every time you go to the office, on a luncheon date, to the grocery store, to the gym, and all the other places you’d likely venture to on any given day ensures that you are putting yourself in the position to have agency and power at the ready. You might think of bringing your permission with you the way you would that favorite shade of Fenty lipstick you’d slide into your evening bag for that touch-up you’re likely to need at some point after dinner, drinks, and oh, yes, that passionate kiss you were holding out for. Perhaps you’ll write yourself a permission slip to remind yourself that you’re pretty enough and powerful enough, that whatever name your mama or whoever gave you is perfect just the way it is. You can place your permission slip in that same handbag and have it at your fingertips in case you need a reminder of just how close your self-approval is at any moment. To have access to your own permission is all a part of having a voice, having your say.

Regina Louise is the author of Permission Granted. Her bestselling memoirs Somebody’s Someone and Someone Has Led This Child to Believe were made into the award-winning Lifetime movie I Am Somebody’s Child: The Regina Louise Story, which was nominated for a 2020 NAACP Award for Best Director. Visit her online at http://www.IamReginaLouise.com.