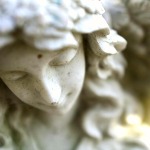 An Excerpt from A Book of Miracles by Dr. Bernie Siegel

One evening I arranged my notes on the podium and began my lecture. I noticed that what I was saying was not following my outline. I kept struggling to get back to my outline for the talk, but after a few minutes I realized the talk I had not planned was better than the one I had. So I just let the words flow out of me for the next two hours. At the conclusion of my presentation, a woman walked up to me and said, “I’ve heard you before. That was better than usual.” The next woman came up and said, “Standing in front of you for the entire talk was this man. I drew his picture for you.” When I looked at the picture I knew who it was: George.

George is my inner guide, whom I met when doing guided imagery, as a nonbeliever, for the first time. The picture she drew was the same as one I had drawn for Elisabeth Kübler-Ross years before. From that day forward, George does all my talks for me. They come from a place of consciousness shared with the audience.

A few years later, after delivering a funeral sermon for a friend one Sunday morning, I was standing alone in the hallway when Olga Worrall, a well-known healer, who had attended the funeral of our mutual friend, came up to me. “Bernie, are you Jewish?” I asked her if she wanted to know because I had delivered a Sunday sermon. She said, “No, it’s because there are two rabbis standing next to you.” Her description of them from their garments to their beards was again exactly like George. I think his presence in my life explains many of my miraculous experiences.

I have been in four life-threatening accidents, in-cluding choking nearly to death, car collisions, and falling off the roof when a ladder broke. Each time I walked away with no serious injuries. I said to an audience one night, “I must have an angel.”

I believe we all have angels or guides. I can’t help but think of the story of the lady who hears a voice say, “Jump back.” She does and realizes she would have been hit by a bus if she kept crossing the street. It’s a good thing she listened!

We must remember that there is always hope. We are capable of amazing things, and when we do not fear failure, we have nothing to lose by attempting to achieve the miraculous.

Dr. Bernie Siegel’s multi-million best-selling first book, Love, Medicine & Miracles, was published in 1986. He is the author of multiple other books including A Book of Miracles, 101 Exercises for the Soul, and 365 Prescriptions for the Soul. Dr. Siegel lives with his wife in Connecticut. They have five grown children and several grandchildren. More information at www.berniesiegelmd.com.

Excerpted from the book, A Book of Miracles. Copyright © 2011 by Bernie Siegel. Reprinted with permission from New World Library. www.NewWorldLibrary.com.