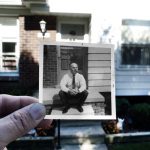 The fourth major category of ESP shown in the Cayce readings is retrocognition, the ability to see past events.

For example, in the life readings (those readings which dealt with the soul) Cayce would often repeat aloud significant happenings in a person's life while going back over the years until the date of the person's birth. In one reading, he said, "1935-'32-disturbing periods-'31-'36-'26-not any too peaceful!" etc. In another life reading , Cayce was given the incorrect date and location of birth for a young girl. In going back over the years he responded with, "We don't find it here". (He had been incorrectly told that the child was born on January 24, 1919 in Cleveland, Ohio). Then, after a short pause, he finally said, "Yes, we have the record here (looks like it's the wrong place and date)." It was later discovered that the girl had been born on January 23 (a day earlier) in New York City and not in Cleveland.

More than eleven years before the Dead Sea Scrolls were found in 1947, Cayce's readings described a sect of Judaism about which scholars knew little. This group was the Essenes. Cayce gave a great deal of information about their work and their life in the community. For example, he claimed that in the Essene society men and women worked and lived together. At the time of the reading, scholars believed that the Essenes were a monastic society composed exclusively of men. However, in 1951, more than six years after Cayce's death, archaeologists made further excavations at Qumran near the site where the Dead Sea Scrolls were found. They discovered evidence that both men and women lived together in the Essene society. These are just a few of the many examples of ESP in the Cayce readings.

Because "psychic is of the soul," the Cayce information suggests that it is relatively easy to induce personal psychic experiences. However, the phenomenon that manifests itself through psychic channels can oftentimes get us off the track. The readings suggest that instead of seeking psychic experiences for the sake of having them, we should seek only those within the context of spiritual growth, of learning about ourselves, or of being of service to others.

People often have the tendency to make psychic experiences seem unusual, out of the ordinary, special, somehow set apart, or perhaps even frightening. However in the Cayce approach, psychic information is as natural as an "intuition" or a "hunch." In addition, just because something is "psychic" does not mean it's 100 percent accurate. We may wish to work with psychic information to the same degree that we would listen to the advice of a trusted friend: it can be utilized as an additional tool for gathering insights and for making decisions - it shouldn't necessarily be given any more credence than information from any of our other friends (or senses); however, it shouldn't be given any less either.

In time, individuals may work with their own intuition in such a way that it becomes as natural as using any of their other senses: taste, smell, touch, hearing, or sight. Related Books: Edgar Cayce on Religion, Spirituality, and Psychic Experience by Harmon Bro, PhD, Psychic Sense an Edgar Cayce Series Book, Edgar Cayce on the Akashic Records by Kevin J. Todeschi