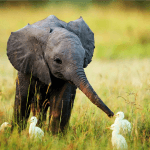 Do animals have a sense of morality? Do they know right from wrong? In our forthcoming book, Wild Justice: The Moral Lives of Animals, philosopher Jessica Pierce and I argue that the answer to both of these questions is a resounding yes. Ought and should regarding what’s right and what’s wrong play important roles in the social interactions of animals, just as they do in ours. Historically, others agree.

Charles Darwin believed that animals, like humans, could be moral beings. He suggested that human morality is continuous with similar social behavior in other animals. Darwin paid special attention to the capacity for sympathy, which he believed was evidenced in a large numbers of animals. Darwin wrote, Any animal whatever, endowed with well-marked social instincts…would inevitably acquire a moral sense of conscience, as soon as its intellectual powers had become as well-developed, or nearly as well-developed, as in man.

In the 1980s, Jane Goodall noted in her book The Chimpanzees of Gombe, [I]t is easy to get the impression that chimpanzees are more aggressive than they really are. In actuality, peaceful interactions are far more frequent than aggressive ones; mild threatening gestures are more common than vigorous ones; threats per se occur much more often than fights; and serious, wounding fights are very rare compared to brief, relatively mild ones.

Consider the following scenarios. A teenage female elephant nursing an injured leg is knocked over by a rambunctious hormone-laden teenage male. An older female sees this happen, chases the male away, and goes back to the younger female and touches her sore leg with her trunk. Eleven elephants rescue a group of captive antelope in KwaZula-Natal; the matriarch elephant undoes all of the latches on the gates of the enclosure with her trunk and lets the gate swing open so the antelope can escape. A rat in a cage refuses to push a lever for food when it sees that another rat receives an electric shock as a result. A male Diana monkey who learned to insert a token into a slot to obtain food helps a female who can’t get the hang of the trick, inserting the token for her and allowing her to eat the food reward. A female fruit-eating bat helps an unrelated female give birth by showing her how to hang in the proper way. A cat named Libby leads her elderly deaf and blind dog friend, Cashew, away from obstacles and to food. In a group of chimpanzees at the Arnhem Zoo in The Netherlands, individuals punish other chimpanzees who are late for dinner because no one eats until they’re all present. A large male dog wants to play with a younger and more submissive male. The big male invites his younger partner to play, and when they play, the big dog restrains himself and bites his younger companion gently and allows him to bite gently in return.

Do these examples show that animals display moral behavior, that they can be compassionate, empathic, altruistic, and fair? Yes, they do. Animals not only have a sense of justice, but also a sense of empathy, forgiveness, trust, reciprocity, and much more as well.

One of the most compelling examples of animals having a sense of morality is the story of a female western lowland gorilla named Binti Jua (Swahili for daughter of sunshine) who lived in the Brookfield Zoo in Illinois. One summer day in 1996, a three-year-old boy climbed the wall of the gorilla enclosure and fell twenty feet onto the concrete floor below. As spectators gaped and the boy’s mother screamed in terror, Binti Jua approached the unconscious boy. She reached down and gently lifted him, cradling him in her arms while her own infant, Koola, clung to her back. Growling warnings at the other gorillas who tried to get close, Binti Jua carried the boy safely to an access gate and the waiting zoo staff. Binti Jua was widely hailed as an animal hero. She was even awarded a medal from the American Legion.

Scientific research has shown that mice display empathy — they feel the pain of other mice and change their behavior. In this compelling story, CeAnn Lambert, director of the Indiana Coyote Rescue Center, saw that two baby mice had become trapped in a sink and were unable to scramble up the slick sides. They were exhausted and frightened. CeAnn filled a small lid with water and placed it in the sink. One of the mice hopped over and drank, but the other was too exhausted to move and remained crouched in the same spot. The stronger mouse found a piece of food and picked it up and carried it to the other. As the weaker mouse tried to nibble on the food, the stronger mouse moved the morsel closer and closer to the water until the weaker mouse could drink. CeAnn created a ramp with a piece of wood and the revived mice were soon able to scramble out of the sink.

The social lives of many animals are strongly shaped by affiliative and cooperative behavior, as Jane Goodall wrote above for chimpanzees. Also consider wolves. For a long time researchers thought that pack size was regulated by available food resources. Wolves typically feed on prey such as elk and moose, both of which are bigger than an individual wolf. Successfully hunting such large ungulates usually takes more than one wolf, so it makes sense to postulate that wolf packs evolved because of the size of wolves’ prey.

However, long-term research by David Mech showed that pack size in wolves is regulated by social and not food-related factors. Mech discovered that the number of wolves who can live together in a coordinated pack is governed by the number of wolves with whom individuals can closely bond (the social attraction factor) balanced against the number of individuals from whom an individual could tolerate competition (the social competition factor). Packs and their codes of conduct break down when there are too many wolves.

Fairness is also an important part of the social life of animals. Researchers Sarah Brosnan, Frans de Waal, and Hillary Schiff discovered what they call inequity aversion in Capuchin monkeys, a highly social and cooperative species in which food sharing is common. These monkeys, especially females, carefully monitor equity and fair treatment among peers. Individuals who are shortchanged during a bartering transaction by being offered a less-preferred treat refuse to cooperate with researchers. The Capuchins expect to be treated fairly.

Research by Friedericke Range and her colleagues in Austria also shows that dogs expect to be treated fairly. Dogs won’t work for food if they see other dogs getting more than they do for performing the same task. Animals are incredibly adept social actors: they form intricate networks of relationships and live by rules of conduct that maintain social balance, or what we call social homeostasis. Humans should be proud of their citizenship in the animal kingdom. We’re not the sole occupants of the moral arena.

Marc Bekoff is professor emeritus of ecology and evolutionary biology at the University of Colorado, Boulder. He has worked alongside leading writers and activists including Jane Goodall, Peter Singer, and PETA cofounder Ingrid Newkirk. He lives in Boulder, CO.

Excerpted from the book Why Dogs Hump and Bees Get Depressed, © Copyright 2013 by Marc Bekoff. Reprinted here with permission from New World Library.