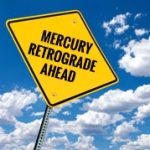 Mercury Retrograde Alert! Even though Mercury doesn’t officially go retrograde until this Sunday, it has a reputation for making its presence known a week or more beforehand, so expect to see signs of this event as early as Monday. You know the drill - miscommunication, computer glitches, memory lapses and items going missing at a moment’s notice! This year Mercury is retrograding through earth signs, and just like the Mercury retrograde we had at the start of the year in Capricorn, it’s backward swim through Taurus means three weeks of going back to clear physical clutter, recommit to our health resolutions and get a handle on our finances. We’ll also have Saturn turning retrograde on Wednesday in the sign of Sagittarius. A longer cycle than Mercury, Saturn will be retracing its steps through Sagittarius until August 25. Saturn is known as the planet of boundaries and responsibilities, so when it’s retrograde, we may find ourselves testing the limits and lightening our loads. Because it’s more subtle than Mercury, we may not notice when it turns direct this Wednesday, but higher awareness will enable us to see that this cycle allows us a break from all the hard work we’ve been doing and encourages us to go back and take a second look at our priorities, values and beliefs.