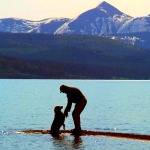 People around the world often remark how being around their pets (now usually referred to as companion animals) makes them feel good. Much recent research supports this. Here are a few tidbits from a July 2010 USA Weekend article Why Pets Are Good for Us about what we know about the positive effect that companion animals such as dogs, cats, and fish have on us. For more, Marty Becker’s The Healing Power of Pets and Allen Schoen’s Kindred Spirits summarize much research that has laid the groundwork for current work on the nature of the human-animal bond, and Michelle Rivera writes about animals in hospice situations and how they can ease human suffering in her recent book On Dogs and Dying. To quote the USA Weekend article:

Watch a Lassie movie and spit into a cup. It doesn’t sound like it, but this is cutting-edge research. By analyzing saliva, researcher Cheryl Krause-Parello can tell that merely watching a dog in a movie lowers people’s stress. In recent years, research has demonstrated the healthful benefits of pets. Now, investigators are trying to figure out why pets are good for us. Krause-Parello, assistant professor and director of the Center for Nursing Research at Kean University in Union, NJ, learned that people feel better after watching a Lassie flick because their levels of cortisol, a hormone associated with stress, take a free fall.

The article continues, In her book For the Love of a Dog, Patricia McConnell, a certified applied animal behaviorist, writes that levels of oxytocin, a mood-affecting neurotransmitter and ‘feel-good’ hormone in the brain, increase by merely petting a dog. Meg Daley Olmert summarizes recent research on the wide-ranging role of oxytocin in her book Made for Each Other. Fish also help us along. The article says, After bowls of goldfish animals were placed in nursing-facility dining rooms, most patients experienced an appetite increase and subsequent weight gain.

Current research also shows cats are very important for preventing death from heart attacks. Results of a decade-long study suggest cats may have special health-sustaining qualities, which is probably no big surprise to Americans, who own more cats than dogs. For ten years, Adnan Qureshi, professor of neurosurgery and neurology at the University of Minnesota, followed 4,500 people and in 2008 announced his study’s intriguing conclusions: Those who owned a cat were 40 percent less likely to die from heart attacks than those who had no feline in their lives. Owning a dog did not appear to convey the same protection. That statistical result is so far unexplained, Qureshi says. Other factors may contribute to the difference.

Children also benefit from the presence of companion animals. In 2003, Barbara McClasky, a nursing professor at Pittsburg State University in Kansas, studied children seven to fourteen years old. If they lived with a pet — any pet — their self-concept and competence increased, she found.

All in all, according to Mayo Clinic oncologist Edward Creagan, A pet is a medication without side effects that has so many benefits…I can’t always explain it myself, but for years now I’ve seen how instances of having a pet is like an effective drug. It really does help people.

The future of research in this area is wide open and shows that, when we allow animals into our lives, we, and of course they, can benefit in many different ways.

Marc Bekoff is professor emeritus of ecology and evolutionary biology at the University of Colorado, Boulder. He has worked alongside leading writers and activists including Jane Goodall, Peter Singer, and PETA cofounder Ingrid Newkirk. He lives in Boulder, CO.

Excerpted from the book Why Dogs Hump and Bees Get Depressed, © Copyright 2013 by Marc Bekoff. Reprinted here with permission from New World Library.